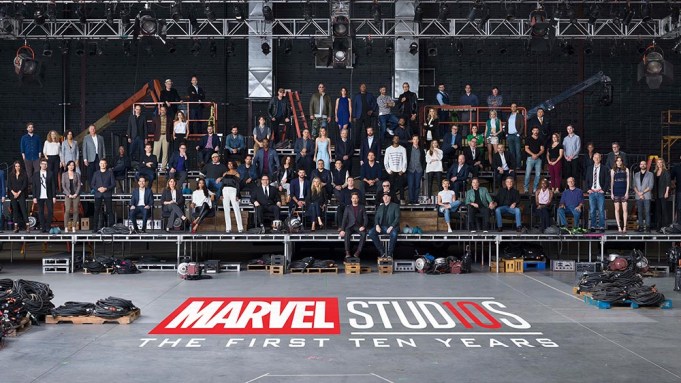 In what was a little different than the average class photo, Marvel Studios brought together 80 of its stars and filmmakers for one picture in honor of its 10-year anniversary.

On Oct. 7, the group gathered in secret on the Atlanta set of “Avengers: Infinity War” for the photo to celebrate the last decade of the Marvel Comics Universe.

Some of those who worked behind the camera to create the Marvel films were also featured, including Stan Lee, James Gunn, and Ryan Coogler.

(Click here to view a larger version of the image.)

In a clip released by Disney showing the behind-the-scenes of the photo shoot, “Thor’s” Hemsworth said, “It felt like being at the Academy Awards or something. Every person had been in one or all of my favorite films.”

“There’s a ton of fan-boying and fan-girling going on in that room with each other,” Cheadle added, who has played War Machine in a number of Marvel films.

“Iron Man’s” Downey Jr., featured prominently in the class photo, said, “I literally am dead-center in the front row and I’m looking around going, ‘Any one of these people could be dead-center.'”

The photo kicks off Marvel’s 10-Year Sweepstakes, which will take place across social media and last from Feb. 8 to March 15. A winner will be selected each week to receive an “Ultimate Marvel Fan Prize” package, which includes a visit to the “Captain Marvel” set and a tour of Marvel Studios.

Marvel is celebrating its most recent release “Black Panther,” hitting theaters Feb. 16, but the studio’s 10th anniversary will officially begin with the release of “Avengers: Infinity War” on May 4.