Maggie Gyllenhaal, Regina King on Intimacy Experts: ‘I Could Have Used the Help When I Was Younger’ 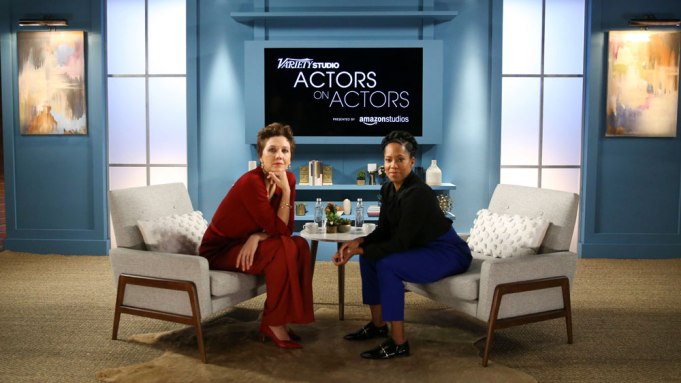 Maggie Gyllenhaal’s sex-trade industry series “The Deuce” features one job that’s unlike any other in television: an intimacy expert.

During her Variety Actors on Actors interview with Regina King, “The Kindergarten Teacher” actress explained how the strange role is actually important in helping young actresses stand up for themselves, especially when it comes to sex scenes on screen.

“I have done so many sex scenes in my life; I have learned how to protect myself. I’m good with it. I don’t actually want someone talking to me,” Gyllenhaal says. “But I can also see that the woman who came in, who’s 22, who got the job, who’s a great actress, who has to take her clothes off, who doesn’t know how to say no, who’s learning how to say no. … I know that this person needs that help. I could have used the help when I was younger.”

King agreed with Gyllenhaal’s praise for the job and offered her own take on how the position could be an important teaching tool for directors. Since its inception, King says the role has been a polarizing topic for the Directors Guild of America, which has discussed its importance at several meetings.

“Some directors don’t love it because they feel like, ‘that’s my job,’ but then there were other directors that felt like, ‘I needed her there to help me articulate what I want from the actor and help me do it in a way that I am not offending,'” she says. “I think a lot of what’s happening with the #MeToo movement, [we] have a lot of male directors trying to figure out how to navigate — and I’m glad that they are — and because they are trying to figure out, we should be educating them.”