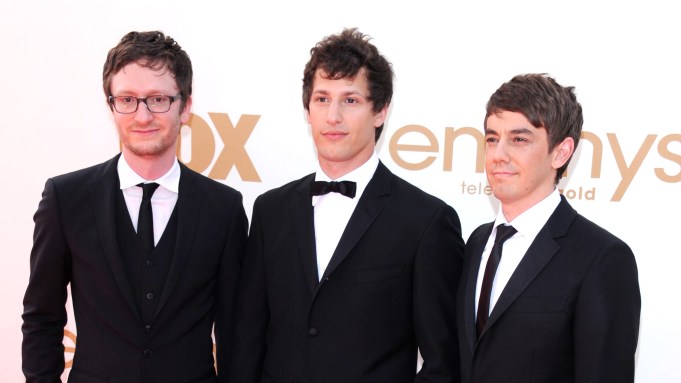 The Lonely Island released a video lamenting the lack of nominations for Hollywood blockbusters at the Oscars, which they claim was supposed to air during Sunday’s ceremony.

Opening with a teleprompter-like crawl, a letter from the comedy trio — Akiva Schaffer, Andy Samberg, and Jorma Taccone — reads, “We were asked to write a song for this year’s Oscars… Unfortunately it wasn’t chosen because it was ‘financially and logistically impossible,’ so for fun we thought we’d share the rough storyboards of what would have been a fully shot, star studded music video of exorbitant cost.”

The video continues with a slideshow of stills featuring characters from popular 2017 movies — including “Wonder Woman,” “Thor: Ragnarok,” “It,” and “Girls Trip” — as dubbed musical voiceovers play in the background.

“Why not me? Do I not deserve a nomination?” Thor muses as an illustration of the superhero reading through “Thor: Ragnarok’s” rave reviews in the paper flashes onto the screen.

“Saved the world from the devil below, but I’m sure it was hard for Sir Daniel Day Lewis to learn how to sew,” Wonder Woman chimes in.

The pair then harmonizes in superhero solidarity. “We both faced death, it’s true, but at least ‘Lady Bird’ got into NYU,” they sing, poking fun at the film’s five Oscar nominations.

The music takes a dark turn as “It’s” Pennywise enters the chorus, questioning why “All the Money in the World” deserved a nomination for kidnapping one kid while he murdered hundreds.

“Girls Trip” and Oscar presenter Tiffany Haddish joins the cry, too, proclaiming, “I peed while hanging from a zipline! Meryl Streep has never done that!”

Several other blockbuster characters and celebrities lend their dubbed voices to the rally throughout the remainder of the music video, including four of Hollywood’s Chrises — Hemsworth, Pine, Evans, and Pratt” — as they beg for some kind of recognition.

“We’d like to petition for a new category: best Chris,” they sing in unison. “Or, you can just write ‘Chris’ on an Oscar, and we can share it.”

Watch the full parody video above.