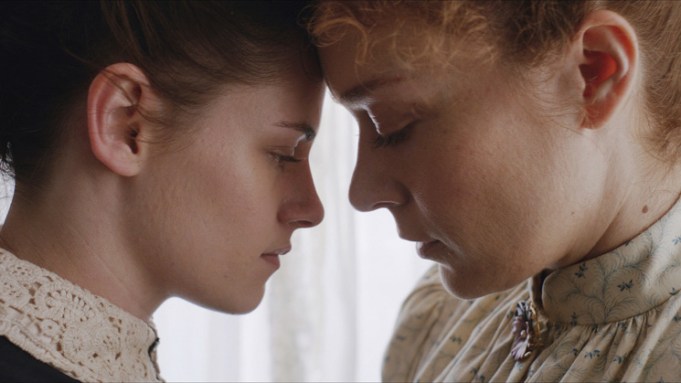 After debuting at the Sundance Film Festival in January, Chloe Sevigny’s passion project is finally hacking its way to the big screen.

Set in 1892, “Lizzie” follows the notorious would-be axe murderess Lizzie Borden (Sevigny), who was accused and acquitted of killing her father and stepmother in Fall River, Mass. Kristen Stewart co-stars as Bridget Sullivan, an Irish maid who comes to live with the Borden family and secretly develops an intimate relationship with Lizzie.

In the clip, Sevigny is shown as Lizzie as she’s interrogated about her father’s murder. When asked if Andrew Borden might have had any enemies, she responds, “This is America, sir. Every man with a pulse has enemies.”

The footage also features shots of Lizzie’s abuse at the hands of her father, her growing romance with Bridget, and, of course, the infamous murders.

As Sevigny shared with the Huffington Post, she had been working on adapting the biographical tale since 2010 with screenwriter Bryce Kass, first as a four-hour miniseries with Playtone at HBO and now into a feature for Roadside Attractions and Saban Films. Sevigny serves as an executive producer on the period drama.

Craig William Macneill (“The Boy,” “Channel Zero: Candle Cove”) directs the film exploring the days leading up to the savage crimes enmeshed in a storm of repression, exploitation, and thwarted dreams.