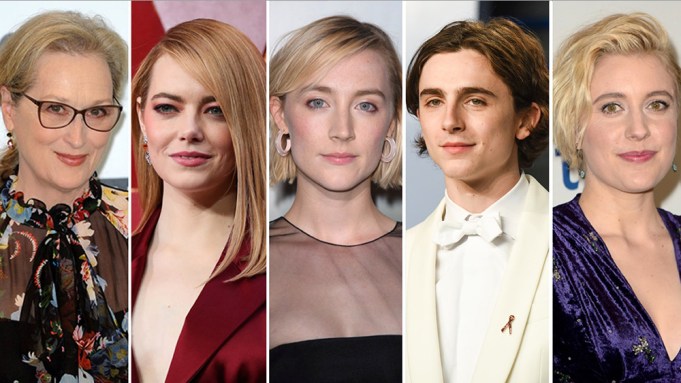 Following her critically acclaimed and Oscar-nominated “Lady Bird,” Greta Gerwig is eyeing “Little Women” as her next directing gig.

A-listers Meryl Streep, Emma Stone, Saoirse Ronan and Timothee Chalamet are in talks to star in Columbia Pictures’ retelling of the American classic with Florence Pugh also in talks to star. The movie would mark a reunion for Gerwig, Ronan and Chalamet. The young actors starred in 2017’s coming-of-age comedy “Lady Bird.”

The roles are unknown at this time as some castings are still being worked out. Sources tell Variety the studio is expected to test a handful of actresses opposite Stone for the role of Beth before the July 4 holiday.

The project has been set up at Columbia Pictures for some time, with Amy Pascal set to produce with Denise Di Novi and Robin Swicord. Andrea Giannetti will oversee the production for Columbia Pictures.

Gerwig was initially brought in to rewrite a draft, but following “Lady Bird’s” success, Sony amped up pre-production in order to woo Gerwig into picking this as her next movie.

The novel by Louisa May Alcott, which follows the March sisters in post-Civil War America, has been adapted several times into feature films, with the 1994 version starring Winona Ryder being the most popular. The BBC’s “Little Women” miniseries aired late last year.

This would mark a major coup for Sony and Pascal, who have always coveted the IP, but wanted to make sure the right pieces were in place before pushing the project forward. If this deal makes, the package of high-profile talent ensures a fast-track into production.

The timing for the ensemble works out as well. Streep is about to finish HBO’s second season of “Big Little Lies” and can be seen next in Disney’s “Mary Poppins Returns.”

Stone had been eyeing several options after wrapping production on “The Favourite,” which is expected to be an awards contender when it opens in November. As for Gerwig’s “Lady Bird” stars, Ronan just finished shooting “Mary Queen of Scots,” which bows in the fall, and Chalamet recently started production on the Netflix pic “The King.”