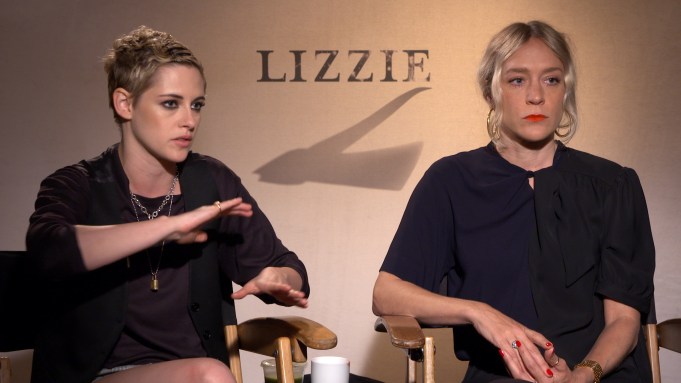 “Watch. I’m gonna say all this, and then you’re gonna be like, ‘You guys didn’t do that at all,” Kristen Stewart joked about her upcoming “Charlie’s Angels” reboot that is about to head into production.

While promoting historical biopic “Lizzie” with co-star and producer Chloe Sevigny, Stewart noted that the new “Angels” “is still gonna be fun and ‘Charlie’s Angels’-y, but will also be current and modern.”

One of those modern updates, of course, is Elizabeth Banks playing Bosley, a role traditionally played by a man in previous iterations. Banks will also direct the film.

While Stewart claims that she loved the previous installments and thinks they are hilarious, she stopped herself before striking a comparison with the new film. “God, it’s so funny. I know if I say this a certain way, I know that this will be written down. But it’s not such a bad thing,” she said.

Sevigny chimed in, adding that today’s audience does not take “frivolity” lightly. Stewart agreed, explaining how “there’s a kitsch nature to the last ones that was super fun. But nowadays, if you see a woman in combat, everything should be completely and utterly within their ability.”

“Charlie’s” will also feature a “whole network of angels,” according to Stewart. “It’s not just three. Women across the entire globe are connected and helping each other,” she said.

Noting how the new Angels “work together really, really beautifully,” no word has come up yet if former Angels Cameron Diaz, Drew Barrymore, or Lucy Liu will be making any cameos.