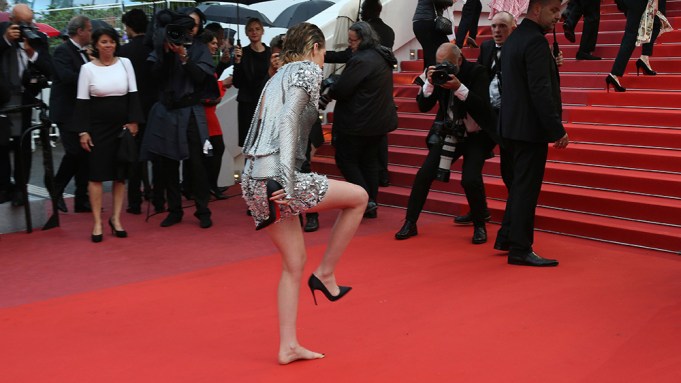 Cannes competition jury member Kristen Stewart started out walking the red carpet Monday night before the premiere of Spike Lee’s “BlacKkKlansman” in sky-high Louboutin spike heels, but removed them before climbing the stairs, which she ascended barefoot.

It wasn’t clear if her act was a demonstration against Cannes’ notorious policy of requiring women to wear high heels on the red carpet or whether she wanted to feel more secure on the somewhat soggy red carpet.

The festival has seen mostly clear skies, but Monday rain fell off and on throughout the day and red carpet photographers juggled cameras and umbrellas at Lee’s well-received premiere.

Since Heelgate in 2015, in which a producer with a foot injury said a Palais guard wouldn’t let her in to a screening because of insufficiently formal footwear, the festival has taken pains to point out that there is no requirement to wear high heels. The festival retains its black-tie dress code, which is open to interpretation but for the past few years has not been enforced as strictly as in the past.

Emily Blunt told a press conference that year “Everyone should wear flats, to be honest.”