Kevin Hart Reveals His Media Mogul Plan at Variety’s Massive Summit: ‘I Want to Be a Billionaire’ 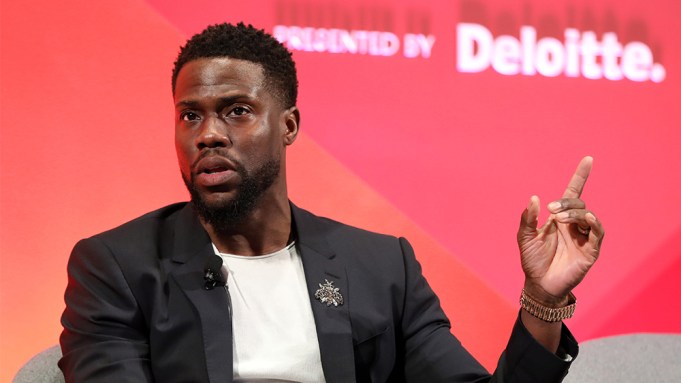 Kevin Hart provided a glimpse into his mogul-in-the-making mindset during his keynote conversation at the Variety Massive Summit in Los Angeles on Wednesday.

“The goal of being a mogul is a real one,” Hart told Variety‘s co-editor in chief Andrew Wallenstein. “I want to be a billionaire…I’m 38. By the time I’m 45, you guys are going to be telling a completely different story.”

Given Hart’s level of hustle, he is well on his way to achieving that goal. The multi-talented stand up comedian, actor, producer, writer, and content creator said he has no plans to slow down any time soon.

“I don’t understand why people work hard to get comfortable,” he said at Variety’s marketing event, which was presented by Deloitte.

Hart claims his work ethic derived from a simple piece of advice he got from his mother. After he failed to win a trophy at a swim meet as a child, Hart’s mother told him, “You can be great or you can not be great.” From there, he has pushed himself to be more than just an actor or comedian, but rather a franchise unto himself who partners with studios rather than being a performer-for-hire.

“I want the f–king trophies, man,” he said. “The trophy in entertainment is success, it’s ownership, it’s a brand.”

A massive part of Hart’s brand comes from his mastery of social media. He currently boasts over 100 million followers across platforms, offering fans daily insight into both his successes and his tribulations.

“The gift is, it’s access,” he said. “Today’s star and celebrity, you’re big and you become bigger when your fans feel like they see behind the closed door. There was a time where it was such an experience and mystique around stars. You only saw them when it was time to see them…Social media has allowed these stars to show that they’re people.”

In addition, Hart talked about his admiration of Hollywood mogul Tyler Perry, who owns a 330-acre film and TV studio in Atlanta.

“The fact that they shot ‘Black Panther’ on Tyler Perry’s stage, blows (my mind),” he said. “How do I do that?” Hart asked. “How do I put myself in a position to give this younger generation what I don’t have?”

Hart also discussed plans to grow HartBeat Prods., his production company for TV And film projects. He touted his recent hire of John Cheng, formerly head of development at RatPac Entertainment, to the post of president of film at HartBeat, where he’s working closely alongside Hart.

“I don’t have time to take a s–t,” Hart joked, but said he’d rather prioritize and learn the business than be complacent like a work-for-hire actor.

“I love knowing, I love being informed and being aware,” he said of his brand.

On top of his incredibly packed schedule, Hart also recently launched the Laugh Out Loud (LOL) Network. The video streaming service formed in partnership with Lionsgate showcases original digital content featuring both Hart and up-and-coming comedic voices. After launching in August, the LOL app was downloaded over 500,000 times in its first 30 days, with Hart claiming the service now has 800,000 active users. In addition, LOL launched a 24-hour comedy channel on Sirius XM earlier this year.

All of his projects are leading Hart toward one goal: to take over Hollywood.

“It sounds so crazy, but if you don’t have the mentality of ‘Take over, do everything,’ you’re not doing nothing.”