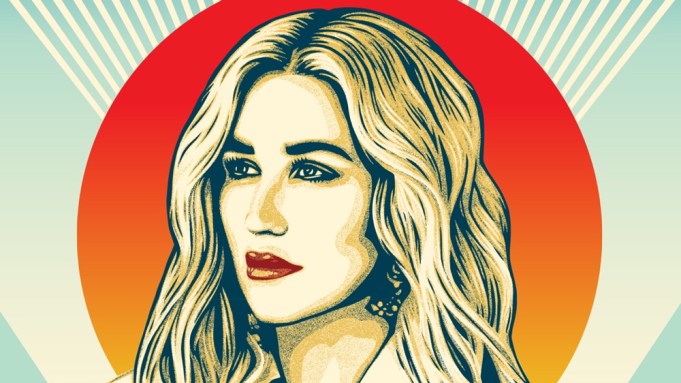 Kesha has released the song “Here Comes the Change” as a rallying cry for empowerment that will be featured in the Ruth Bader Ginsburg movie “On the Basis of Sex.”

The song dropped on Wednesday, three months before the Dec. 25 opening of the movie, which stars Felicity Jones and Armie Hammer. The tune was written by Kesha with Drew Pearson and Stephen Wrabel specifically for the film.

The lyrics include the question “Is it a crazy thought/ That if I had a child/ I hope they live to see the day/ When everyone’s equal?”

Jones portrays a young Ginsburg in “On the Basis of Sex” as she teams with her husband to bring a groundbreaking case before the U.S. Court of Appeals and overturn a century of gender discrimination. The film is premiering five months after Ginsburg’s 25th anniversary on the Supreme Court.

Kesha also joined forces with the non-profit organization HeadCount on the lyric video to encourage fans to vote.

In an essay for Refinery 29, Kesha wrote about the message of equality and empowerment echoed in both the film and her new song, saying, “Together we can prove to our leaders and the rest of the world that we will not tolerate challenges to equality and freedom in our country.”

“I greatly admire Kesha’s artistry and commitment to activism,” “On the Basis of Sex” director Mimi Leder said. “I wanted her to write this song because her passionate voice and immense talent magnify the social justice imperatives Ruth Bader Ginsburg continues to fight for every day. It was important to both of us that this song be not only an anthem to all that Ruth Bader Ginsburg achieved, but also a rallying cry for how much more change is yet to come.”