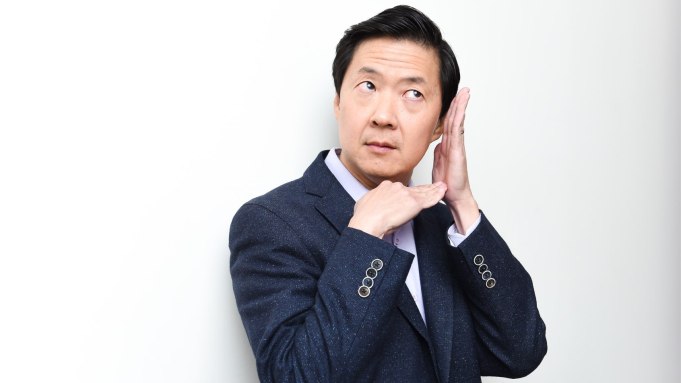 Ken Jeong delighted audiences in “Crazy Rich Asians” as Papa Goh, the high-haired, nouveau riche father of the Goh family. But behind the laughter, a range of emotions welled behind the comedian, for the road to “Crazy Rich Asians” was a deeply emotional one. Even now, while doing press for the film, Jeong can’t help but get emotional talking about the impact of this feature film.

“It’s bigger than us,” Jeong said. “This movie is bigger. I have a very modest, small role in this movie, yet, I’ve never felt so culturally emotional about it.”

Getting “Crazy Rich Asians” made the way author Kevin Kwan and director Jon M. Chu wanted it has been a battle, one Jeong himself has had to wage on the set of “Dr. Ken” as well. And he’s ready for Hollywood, and the world to change.

Here’s our full interview with Ken Jeong, which you can watch in the video above as well:

I didn’t recognize you without the track suit!

And the pompadour? It was crazy, like Asian Elvis.

Was that a pomade situation?

Jon Chu had this idea of me playing Papa Goh and he showed me, he had a little story board of my character, and I was dying laughing. I was like, “This is perfect.” Really, all the credit for Mary [E. Vogt] and the incredible costumes on here, but Jon, all credit goes to him.

How did you get involved?

It just kind of came together organically. I was pleasantly surprised to see how loose Jon was. He was very trusting of me and Awkwafina to shape the scene, as long as we told the story. The whole point was to establish the Goh family in a bit of a contrast to the Young family, which is, we have this new money versus old money. Although the Goh family is very eccentric, Wye Mun Goh is a very loving father. So I was able to utilize my best, the stuff I do best which is over-the-top comedic acting with a layer of humanity. It was a little bit of Mr. Chow, it was also a little bit of Dr. Ken.

I saw some Chow in there!

A little bit, like a nod and a wink to where you’re misdirecting, “Is he going to do that Mr. Chow… ” and then, boom, to go right into…

I was waiting for the full Chow.

That was all my idea, and Jon kept it in the movie. It was great. I think the deeper story behind that was [that] Jon and I are friends, I was excited when the book was going to be made into a movie. And once that was green lit, I was just a big supporter of it, with or without my involvement.

As we were getting closer to the film’s release, I get unexpectedly emotional about it because it’s bigger than us. This movie is bigger. I have a very modest, small role in this movie, yet, I’ve never felt so culturally emotional about it. I have a career, I’m very fortunate right now. I have work and I have the best life and the best family. But coming from a guy who created “Dr. Ken,” that was very passionate about getting Asian American voices heard, I pushed hard to get five Asian American series regulars on a network show and that is so hard to do.

What were some of the roadblocks?

It’s exactly the same thing that Kevin Kwan went through when he was choosing potential production partners. They were suggesting that Rachel be white. There is a producer that suggested that my wife be white and it was based on my own life. This happens all the time. That cultural, although well-intentioned, insensitivity is a part of the behind-the-scenes lexicon of any Asian American producer.

[“Crazy Rich Asians”] went through it on a much grander scale than I did. It is one of those things that we’re all united as brothers and sisters. So when I’m emailing Jon from the set of “Dr. Ken” going, “Look man, I’m just rooting for this,” doing it as a peer. And then when Jon asked me to be a part of it, I literally was like, “Brother, I’ll do whatever you want me to do. And if I’m not in it, that’s fine too.”

It’s really hard to describe if you’re not Asian American, how emotional when people watch this, I cry. I’ve seen the movie a few times and I always cry at that wedding scene. The characters that I care about in the first 45 minutes, you realize they all look like me and something comes over me where it’s not a plot point anymore, it’s something, and that’s what the best movies do. It’s not about the talent, it’s not about anything, it’s about connecting. All forms of entertainment are about connecting. And this is the first major cinematic experience in 25 years.

It’s an entire generation of Asian Americans saying to the mainstream, “We’re connecting with you and we’re hoping that other Asian American filmmakers who have equally deserving voices to be heard on a major commercial platform, on something that’s not independent.” Which I have actually financed and produced myself. “Advantageous,” written and directed by Jennifer Phang is an all Asian cast and I helped finance that movie and got it to Sundance where it won a jury award.

A lot of people don’t know the passion I have for Asian American cinema. “Seoul Searching” [is] another movie by Benson Lee, I was also a producer on that, and “Ktown Cowboys,” [I was] behind the scenes on that. I wasn’t in any of these movies, it was not me being in front of the camera.

So “Crazy Rich Asians” is, boy, it is the T-Rex of all of these. I did not expect to be this emotional about it. It’s real. And I’m glad I’m feeling that it’s real. It’s great.

What is one Hollywood stereotype that you wish would just go away, never be on screen again?

I think it’s changing already. A lot of people say that this is the first Hollywood movie in 25 years, where has it been? Well, you know what? It’s been on “Fresh Off the Boat” for five years. In the age of streaming where there’s a continuum between TV and film, right now I look at this as a continuum of four amazing years of “Fresh Off the Boat.” I think that helped “Crazy Rich Asians” get made. “Fresh off the Boat” helped me have my own show for two years, 44 episodes. I feel it’s a movement that has been continuing. And it’s not just out of nowhere, it doesn’t work that way.

When was the first time that you felt represented on film?

As a kid watching “The Karate Kid” with Pat Morita was just mind-blowing because, A, he was funny and his comedic timing was impeccable. That was a towering figure in my worldview as a kid. As I got older, Margaret Cho, obviously, with “All America Girl” on ABC and she played my sister on “Dr. Ken.” 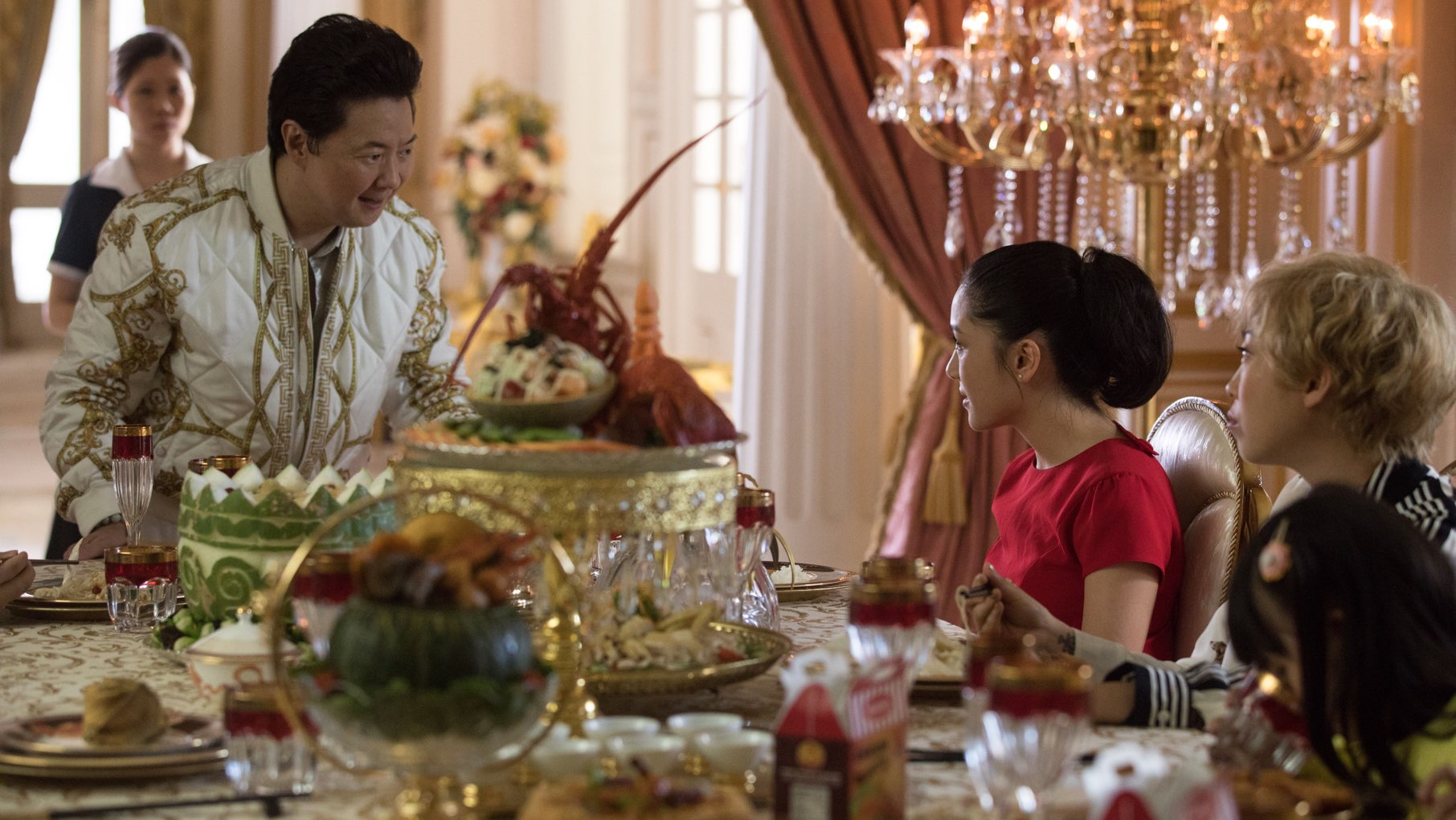 Henry brought up that he would like to see a Gohs movie, “Meet the Gohs?”

There were always jokes about that on the set because of the chemistry between Nora Awkwafina, who steals the movie, and myself, I play her father.

No, no I can’t. No. That doesn’t run in the family. It’s also extended into real life when I read about her on “Ocean’s Eight” or when she’s booking another movie or a pilot, I’ll text her all the time, “I’m beaming with pride,” like I’m her real father. I’m just so genuinely happy for her. She’s really a comedic relative because when we’re on set, this is the first time I’d met her or worked with her, we were on the same page comedically from the get go. We just took off running. We could just read each other’s minds. So to do what I do best in these comedic scenes and that’s my specialty, but to do what I do best in a movie that’s already impactful, it’s a dream on top of a dream in many ways.

Do you think ‘Crazy Rich Asians’ will empower us to push back when we feel like we have to?

Yeah, I think a lot of people don’t understand. We’re all conditioned to work hard and it’s not just an Asian thing, it’s an Asian American thing. You maximize the little opportunity you have and I’ve made a career.

And be grateful for it. I have a career where, not just movie-wise or TV-wise, even in medicine, I’ve always had a habit of, “You make the most of whatever is given to us.” Yes, yes, yes to all those things. I think it’s a movement that can’t be denied. It’s a feeling. It feels right and I think to have, again, Jon Chu is fearless, man. He’s a fearless dude. He’s like, “Bring it on.”

How excited are you to be bringing your new show “The Masked Singer” over from Korea?

The people at Fox have acquired the rights from Korea and Thailand. “The King of Masked Singer,” as they call it in Korea, it’s the most popular show in Korea and it’s my Mom’s favorite show.

Have you watched it with her?

Do you guess as you’re watching?

That show also has an Asian undertone to it, even “Masked Singer.”

Yeah, taken over. And we filmed it, it’s amazing and the people will surprise you. It’s unexpectedly moving. When people reveal who they are, more than once, I’ve cried. I’m like, “Oh, man.”

You cry a lot.

I wake up in the morning crying and I’ll tell you why. It’s because I look at myself in the mirror and then I say, “It’ll get better.”

This interview has been edited for clarity.