How Kay Cannon Shattered a Glass Ceiling by Directing ‘Blockers’ 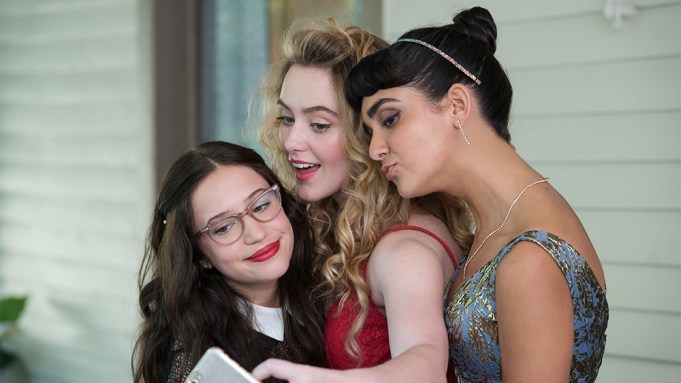 Kay Cannon’s “Blockers” scored big at the weekend box office with $21.4 million. The R-rated comedy is like “Bridesmaids” meets “American Pie,” with a script that follows a group of three high school seniors (played by Kathryn Newton, Geraldine Viswanathan and Gideon Adlon) who make a pact to lose their virginity on prom night. When their parents (Leslie Mann, Ike Barinholtz and John Cena) find out about the scheme, they try to foil it.

“Blockers” follows in the tradition of Judd Apatow’s “The 40-Year-Old Virgin” and “Trainwreck,” as an R-rated comedy that takes no prisoners. But in Hollywood, for the most part, these films are typically made by men. Cannon, a first-time director who produced “Pitch Perfect” and wrote for “30 Rock,” is shattering a glass ceiling by proving female directors can join that club. She spoke to Variety about the film, how it plays in the Time’s Up era and what changes she made to the script to tell her story from a female point of view.

How did you get the job directing “Blockers?”
So I had not been on vacation for six years. And I said to my husband, “I have to go on vacation and I’m not going to work.” We went to Maine, because that’s where his family is from. And then my agent, on the first night we were there, sent me the script. He said, “You have a straight offer to direct this,” which has never happened before. I read the script in the middle of the night on my phone. I knew immediately what kind of take I had on it.

How did you get a straight offer?
I got a straight offer based on potential. Point Grey and Good Universe had a writer’s roundtable for “Neighbors 2.” They had invited a bunch of lady writers to give their lady perspective. When I come to that kind of a thing, I come prepared. I had my computer out and I was basically running my mouth and giving any ideas I had. From that, they thought I had the potential to do a nice job directing.

Was “Blockers” always going to be rated R?
Yeah. In fact, I was asked to make it a harder R. I think I did it. I’ve never done an R-rated anything in my life. Even in my personal life! So luckily, I was working with Seth Rogen and Evan Goldberg and all the guys at Point Grey, who are really great at making R-rated comedies. It was their idea to do what I call the “naked Marco Polo” scene with Gary Cole and Gina Gershon. When I heard that idea, I was like, “That’s awesome.” And then when I saw the first draft of the scene, I was like, “Oh boy.” And they pushed the envelope even further and I did my thing to it.

Do you think we’re at a tipping point in Hollywood when it comes to women directors?
I think the change is now. I think two months ago, I wouldn’t have thought there was a big change. In fact, I thought the numbers were getting worse. I was surprised by that, given there was a lot of success for female driven comedies. But once Frances McDormand said “inclusion rider” [at the Oscars], there’s no hiding now. The numbers have to start increasing or action is going to be taken. I think it’s happening right now before our eyes. Even in casting this movie, I wanted to make it diverse. When you watch the prom, it’s kids from all over the place. It’s different looks and shapes and sizes. I got guys dancing with guys and girls dancing with girls. That was a choice I made.

You said at South by Southwest, where “Blockers” premiered, that you weren’t sure if a female director would have been offered this movie five years ago.
I guess it’s because it’s such an underserved story. I think the reason it’s underserved is because the people who are making these decisions come from a very male perspective. We aren’t used to seeing stories where the female perspective is acknowledged — she has the same wants and desires as the guys and these young women have agency over their bodies.

“Blockers” feels very timely in the Time’s Up and Me Too era.
We shot the movie before. This is stuff we’ve been feeling forever, for generations, and no one has been listening or maybe even allowed us to tell the story — ideas of consent or acknowledgment of the double standard. I totally get it. If a man is dictating a story, he’s doing it from his own personal experience. So when you see an “American Pie,” it’s not a surprise that the female characters in that movie are objects of desire because you are coming from the male perspective.

How did you find the three female actresses who play the leads of the film?
I wanted to cast the parents first. And then for the daughters, I needed to find three people who we would believe would be best friends. I tried many different combinations of really talented actresses. It wasn’t until the very end, right before we started the shoot, that I found Geraldine, Gideon and Kathryn. It was down to the wire. The three of them weren’t together until a week before we started shooting and we had the first rehearsal.

There’s a scene in the film with John Cena and butt chugging.
John was a champ. He was more than OK doing it. I think for both of us, we knew how important the scene was in terms of the comedy of the movie and how far a parent will go to save their daughter. But when we were done, we were both relieved it was over. I felt like I got the scene I wanted to have. And I think he was happy to not be bent over in front of hundreds of high school extras.

Was the coming out scene with Gideon’s character Sam always in the script?
No, that was something I added. I didn’t want the daughters to be interchangeable. I wanted them to have a lot of specificity. And the story with Sam, that was something that was really important. I feel a lot of young women are experiencing that in high school. It’s been so great, because some women have seen the movie and they’ve come up to me and said, “I wish this existed when I was 15 years old. I cannot believe we’re seeing a kiss between two girls who are quirky and different and fun.” It’s just normal. It’s not about disapproving parents. It’s just about figuring out your own life and having a crush on someone.