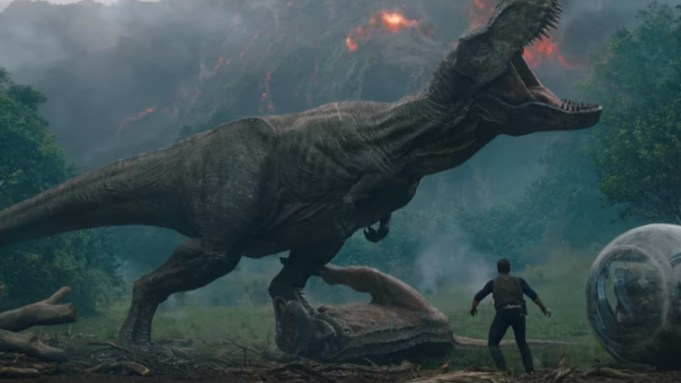 Super Bowl LII viewers were treated to a trailer of (pre)historic proportions when new footage of “Jurassic World: Fallen Kingdom” aired during one of the game’s commercial breaks.

The new clip shows massive destruction across the island as buildings explode and lava flows. “Jurassic World, the island, all of that is in the past,” says a narrator. “I want to show you the future.”

“What is that thing?” Claire (Bryce Dallas Howard) asks, as a growling is heard from off-screen.

“They made it,” responds one of the kids.

“Jurassic World: Fallen Kingdom” is the sequel to Colin Trevorrow’s 2015 reboot of the “Jurassic Park” franchise, which broke the box office record for a weekend U.S. opening with $208 million, eventually earning $1.6 billion worldwide. While J.A. Bayona has taken over directorial duties, Trevorrow remained on the film’s writing team with Derek Connolly.

The first trailer for “Jurassic World: Fallen Kingdom” was released in December and teased the return of Jeff Goldblum’s character, Ian Malcolm. Trevorrow previously whet fans’ appetite ahead of the trailer drop with footage of Chris Pratt’s character Owen interacting with a young velociraptor.

In addition to Pratt, Bryce Dallas Howard will also return to star, along with Justice Smith, James Cromwell, and Toby Jones. “Jurassic World: Fallen Kingdom” roars into theaters on June 22.