‘Jurassic World: Fallen Kingdom’ Reviews: What the Critics Are Saying 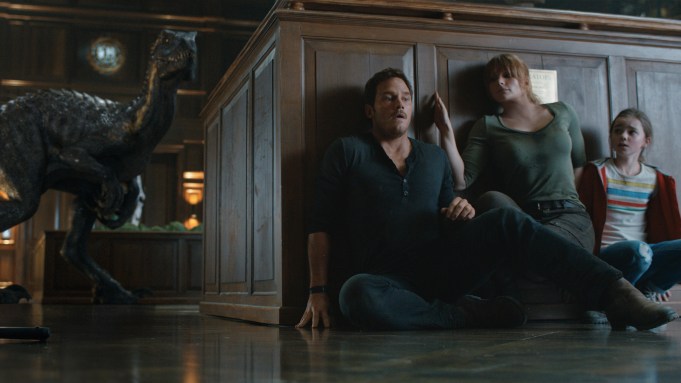 Reviews are trickling in for “Jurassic World: Fallen Kingdom,” and the fifth “Jurassic” installment seems to have left critics mostly satisfied, though still yearning for a little more from yet another dinosaur-filled action-adventure ride. “Fallen Kingdom” currently sits at a 69% on Rotten Tomatoes, a dip from its 2015 predecessor, “Jurassic World,” which finished at a 71%.

Variety’s own Owen Gleiberman said the film reminded him more of 1970s disaster movie than a dinosaur picture, but praised Pratt’s performance, noting he “exudes a lean-and-mean sincerity.”

“The first ‘Jurassic World’ was, quite simply, not a good ride. ‘Fallen Kingdom’ is an improvement, but it’s the first ‘Jurassic’ film to come close to pretending that it isn’t a ride at all, and as a result it ends up being just a so-so ride. I hope the next one is an all-out ride — but that for the first time since Spielberg’s 1993 original, it’s actually a great one. The audience for this series has proved that it will turn out in mega-droves. But it deserves more than a passable rerun taking itself too seriously.”

“‘Fallen Kingdom’ is a more interesting, and less obvious, story than the usual Tyrannosaurus romps, which tend to be death-defying games of hide-and-seek. But you can hear the eye rolls during an 11th-hour twist involving the benevolent billionaire’s granddaughter, which is way too philosophical for a film where dudes’ heads are bitten off by lizards. Jeff Goldblum, making a cameo appearance as Dr. Ian Malcolm, provides all the high-mindedness we need as he natters on about chaos theory in an early monologue.”

“J.A. Bayona feels like the perfect director to take control of ‘Fallen Kingdom’ after proving he can handle large-scale destruction with confidence but is equally capable of delivering intimate scares. There are echoes of his previous works such as The Impossible (big old natural disaster) and The Orphanage (creepy old secret-filled house) in ‘Fallen Kingdom’ but more impressive is how it draws on further inspirations like Alfred Hitchcock and Hammer horror style suspense. The latter is definitely felt throughout the film and Bayona’s use of light and shadows to create tension is one of the highlights of ‘Fallen Kingdom.’ Whether it’s a toothy Baryonyx stalking through a tunnel lit by a menacing drop of lava or the claws of the terrifying new Indoraptor illuminated by a child’s night-light, Bayona’s horror seems classy and rarely resorts to simply jump scares.”

“In the wake of the box-office lunacy that drove ‘Jurassic World’ to become the fifth-highest grossing movie of all time, ‘Fallen Kingdom’ is a frustrating display of overconfidence. It’s occasionally elevated by director J.A. Bayona’s penchant for taut human-versus-dino showdowns, but fleeting moments of inspired filmmaking can’t overshadow the broader tendency of this material to sag into stupidity. Campy dialogue and ludicrous plot twists abound: The fate of these resurrected creatures remains uncertain, but the formula for their movies will never go extinct.”

“There are some reasonably entertaining scenes and set pieces, but the whole concept feels tired and contrived, and crucially the dinosaurs themselves are starting to look samey, without inspiring much of the awe or terror they used to. It could be that a meteor of tedium is heading towards these CGI creatures, despatching them to extinction.”

“None of the characters really stand out, either. Claire and Owen basically just become slightly more self-aware versions of themselves. Mills is never an intimidating villain. Dr. Ian Malcolm (Jeff Goldblum returning to his classic role) is criminally underused. Lockwood’s importance to the franchise feels incredibly forced and, as a result, much of the logic behind the franchise gets undercut and subverted. A few things happen toward the end of ‘Jurassic World: Fallen Kingdom’ that are likely to induce groans more than cheers.”

“I can’t say I’m all that eager to see what becomes of our prehistoric pals next, but at least their latest adventure gives them proper consideration. There’s a scene in ‘Fallen Kingdom’ that will stay with me for a little while: a lone brontosaurus, standing on a shore nearly engulfed in ash and flame, stretching its long neck up to the sky and braying out a mournful plaint. In the context of the film, it’s supposed to be saying, ‘Come back, save me.’ But I don’t know; I think it’s possible that, having had enough, this behemoth is actually saying goodbye. Watching it grandly fade into nothing, I found myself wishing that, for once, someone would honor its wishes.”

“These movies often literally retread the same ground as their predecessors, encountering layers of detritus from those other movies in the process. (The original ‘Jurassic Park’ cars are briefly rediscovered here, just as they were last time around.) The thematic work of ‘Fallen Kingdom’ is scribbly and half-finished, a series of dopey riffs on what came before about humans living with the consequences of their scientific meddling. But as a lava-spewing, raptor-training, teeth-gnashing, monster-in-the-basement creature feature, it has a certain freshness.”

“Needless to say, idealism butts heads with greed, children will be put in peril, doublecrosses will be doublecrossed, and a menagerie of various CG raptors and rexes will pop up to serve well-timed scares to younger moviegoers, including a bit of run-amok mayhem off of the island that’s like a haunted house version of The Lost World‘s San Diego sequence. Howard, thankfully, gets more to do than the last go round (and in combat boots, no less!), Pratt busts out his signature Indiana Jones cocktail of can-do heroism and deadpan sarcasm, and Bayona and his screenwriters (Trevorrow and Derek Connolly) test the laws of incredulity with varying degrees of success. At least, until the final half hour when forehead-slapping hooey finally win out. Up until then, ‘Fallen Kingdom’ is exactly the kind of escapist summer behemoth you want it to be.”

“‘Jurassic World: Fallen Kingdom’ is a high-class summer blockbuster, with some unexpected emotions, a heap of the action that one would expect from such a film, and a dash of surprisingly dark moments that folks have been waiting for since Michael Crichton’s book first hit shelves. This movie needs to be enjoyed in a setting that is as big and as loud as you can get it, simply because it deserves to loom larger-than-life over its audience. It’s a shame that J.A. Bayona isn’t returning for the third film, as his direction is a breath of fresh air in a series that seems to be setting up for a killer continuation and/or finale in the third planned film. In the here and now, this is the sort of dinosaur romp that makes the ‘Jurassic World’ saga something to pay attention to.”