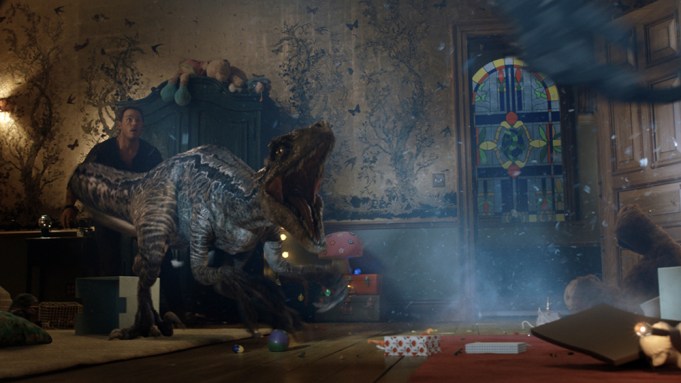 “Jurassic World: Fallen Kingdom” has some dino-sized footprints to fill at the domestic box office.

Though the sequel will fall short of its predecessor’s monstrous debut, “Jurassic World: Fallen Kingdom” will easily score a triple-digit launch. The Universal Pictures and Amblin Entertainment film is stomping toward a domestic debut around $130 million to $140 million when it opens in approximately 4,450 locations. The fifth film in the “Jurassic” franchise, which carries a production budget of $170 million, began its overseas rollout earlier this month and has already pocketed $372 million from 51 international markets, including China. While it got a roaring start abroad, reviews have been mixed for “Fallen Kingdom.” The sci-fi actioner currently holds a 60% average Rotten Tomato score, slightly lower than its predecessor, which had a 71% fresh rating.

Set four years after the events of “Jurassic World,” “Fallen Kingdom” follows Chris Pratt and Bryce Dallas Howard’s characters as they attempt to salvage the remaining dinosaurs on Isla Nublar before a volcanic eruption threatens to destroy it. B.D. Wong and Jeff Goldblum are reprising their roles from the original film series, while Rafe Spall, Justice Smith, Daniella Pineda, and James Cromwell are joining the cast. J.A. Bayona directed from a script by “Jurassic World” helmer Colin Trevorrow and Derek Connolly. In addition to co-writing, Trevorrow also executive produced alongside Steven Spielberg.

Prior to “Fallen Kingdom,” “Jurassic World” marked the first “Jurassic” title in over a decade. The highly anticipated reboot bowed in 2015 with a staggering $208.8 million opening weekend. With another $316 million overseas, “Jurassic World” became the first movie to generate over $500 million in a single weekend. “Avengers: Infinity War,” “The Fate of the Furious,” and “Star Wars: The Force Awakens” have since broken that record. “Jurassic World” went on earn $1.7 billion worldwide, including $652 million in North America and $1 billion internationally. It is still the fifth-highest grossing film ever at the domestic box office.

Meanwhile, “Incredibles 2” will continue to live up to its name — the Disney and Pixar sequel should earn another $75 million to $90 million this weekend. The follow-up to 2004’s “The Incredibles” launched last weekend with $183 million, landing it the eighth-best domestic debut of all time as well as the biggest opening for an animated film and a PG-rated movie. Overseas, it collected $51.5 million, for a global start of $234.5 million. As of Tuesday, “Incredibles 2” had earned $206.3 million in North America.