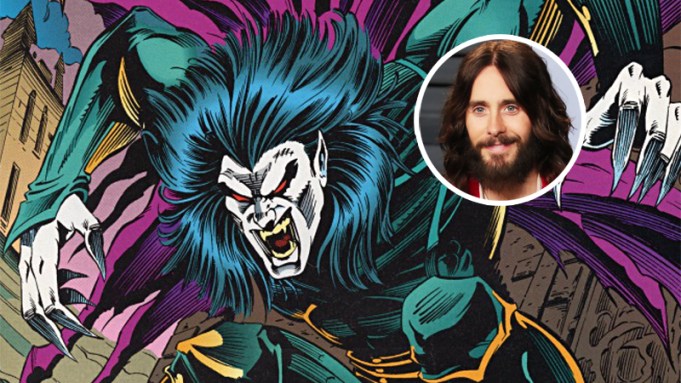 Sony has tapped Jared Leto to star in the spinoff “Morbius,” based on the Spidey villain of the same name. Sources also tell Variety that “Safe House” director Daniel Espinosa will helm the movie.

Leto has been loosely attached to the project for some time, but wouldn’t fully commit until he knew the film was headed in the right direction. He asked to meet with several of the filmmakers who were up for the job. Espinosa met with Leto last month in Germany while Leto was touring with his band Thirty Seconds to Mars, which eventually led to him nabbing the job.

The film was penned by the team of Burk Sharpless and Matt Sazama, who worked on Netflix’s “Lost in Space” series. Palak Patel will oversee the pic for the studio.

Morbius was created in 1971 by writer Roy Thomas and artist Gil Kane for “The Amazing Spider-Man #101.” The character was a scientist who tried to cure himself of a blood disease, with tragic results. He became afflicted with vampiric traits such as fangs and a thirst for blood — and wound up battling Spider-Man.

Morbius appeared sporadically in Marvel Comics in the subsequent years and was revived in the 1992 series “Morbius, the Living Vampire,” which had a run of 32 issues through April of 1995.

Sony has not dated the film, but the movie will likely be slated soon as production is expected to start sometime this year. With “Venom” bowing in October and “Spider-Man: Far From Home” launching next year, Sony hopes this latest project fits in well with the others.

Leto is no stranger to the comic book world, having already played the Joker in 2016’s “Suicide Squad.” Besides promoting his new album “America” with Thirty Seconds to Mars, Leto has been busy setting up a film slate that includes a solo Joker movie at Warner Bros. Sources say this film does not affect that role. The Oscar winner was also recently seen in Netflix’s “The Outsider” and “Blade Runner 2049.”

Espinosa has strong ties to Sony after directing the sci-fi thriller “Life” starring Jake Gyllenhaal and Ryan Reynolds, and is also developing the Afghanistan War pic “Red Platoon” for the studio.