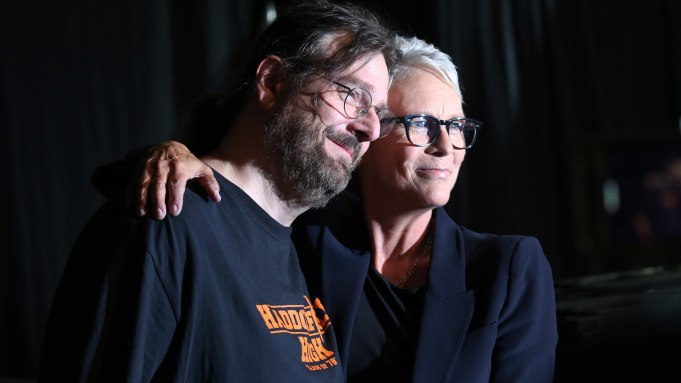 “Halloween” may be an escapist horror pic, but for one man at Comic-Con, it proved to be a lifesaver.

During a question and answer session at Universal’s Hall H presentation on Friday, an attendee choked up while telling star Jamie Lee Curtis that he escaped a life-threatening incident in which another man cut his phone line and tried to break into his house.

He said he thought to himself, “What would Jamie Lee Curtis do?” And ran out into the street, screaming for help.

“To make a long story short, I’m here today because of the way that you portrayed Laurie Strode,” he said. “I’m a victor and not a victim.”

“You’re the only reason I came to Comic-Con this year,” the man confessed.

Curtis left the stage to embrace the fan and gave him a long hug, kissing him on the cheek. “These kind of emotions are real,” said a visibly moved Curtis.

Earlier, the actress had said, “What made Michael Meyers so frightening was his randomness.”

“There’s nothing scarier than caring about a character and introducing a terrifying element,” she added.

“Halloween,” a sequel to the 1978 classic, finds Curtis’ Strode suffering from PTSD and once again facing off with the infamous knife-wielding killer. The film is a sequel to the original and it ignores the many, many sequels (most of them unwatchable) that have been produced in its wake.

“Halloween” finds Strode off the grid, having turned her home into a safe house, complete with a mini-arsenal.

“She lives in complete isolation, waiting for [Michael Myers] to come back because she knows he’s going to,” Curtis said.

The film has added resonance in the Time’s Up and Me Too era, Curtis implied, because “Halloween” enables Strode to “take back her narrative.”

“That weirdly enough seems to be a bit of a thing in the world today,” she added.

An extended trailer screened at Comic-Con showed Myers returning to his hometown on the titular holiday. He’s back to his bloody deeds, bashing in a woman’s head with a hammer and dispatching her neighbor with a carving knife to the jugular.