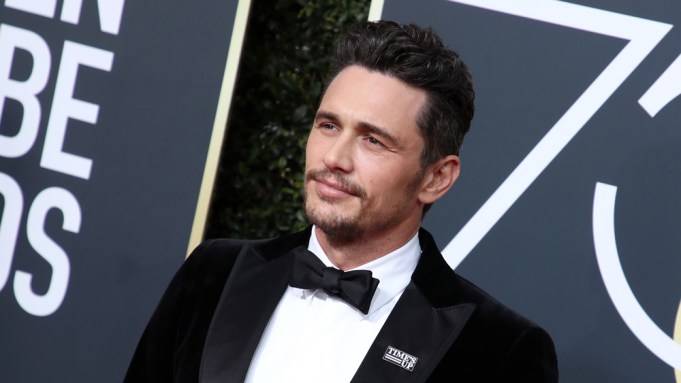 Like other attendees, Franco wore a Time’s Up pin to the Golden Globes ceremony, prompting some women to come forward on Twitter claiming that Franco had sexually harassed them.

Actress Violet Paley accused Franco of attempting to force her to perform oral sex on him and telling a friend of hers to “come to [his] hotel when she was 17.”

Another woman, Sarah Tither-Kaplan, accused Franco of exploiting her in a film she made for him. “Remember a few weeks ago when you told me the full nudity you had me do in two of your movies for $100/day wasn’t exploitative because I signed a contract to do it? Times up on that!” she tweeted. “I 100% did not feel like I had a choice to say no.”

The New York Times also canceled a planned TimesTalk with Franco as a result of the allegations.

Colbert asked Franco what he thought of the current #MeToo and Time’s Up movements.

“First, I want to say that I do support it. Look, I was so excited to win but being in that room that night was incredible. It was powerful. I support change,” Franco said.

When asked about the accusations against him, Franco told Colbert, “There were some things on Twitter, I haven’t read them. I’ve heard about them.”

He then addressed a vague and now-deleted tweet from Ally Sheedy, who Franco directed in a 2014 Broadway play. “I have no idea what I did to Ally Sheedy…I had nothing but a great time with her,” Franco said. “I have total respect for her. I have no idea why she was upset. She took the tweet down…I can’t speak for her.”

“The others…In my life, I pride myself on taking responsibility for things that I’ve done,” he continued. “I have to do that to maintain my well-being. I do it whenever I know that there’s something wrong that needs to be changed, I make it a point to do it.”

“The things that I heard were on Twitter are not accurate, but I completely support people coming out and being able to have a voice because they didn’t have a voice for so long. So I don’t want to shut them down in any way, and I think it’s a good thing and I support it.”

“I can’t live if there’s restitution to be made,” he explained. “If I’ve done something wrong, I will fix it. I have to. I don’t know what else to do. As far as the bigger issue of how we do it, I really don’t have the answers. I think the point of this whole thing is that we listen. I’m here to listen and learn and change my perspective where it’s off. I’m completely willing and want to.”