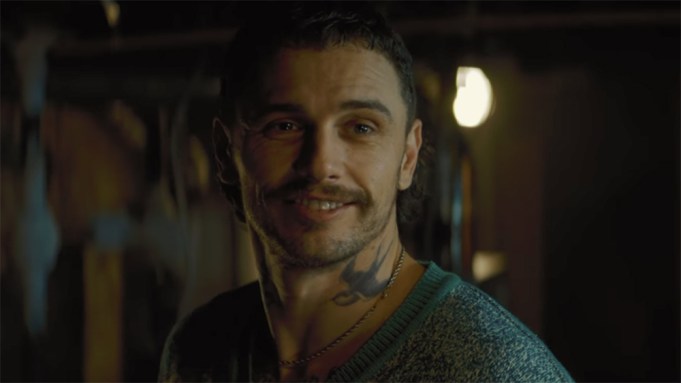 Truitt portrays the younger adopted brother of a recently released ex-con, played by Reynor, and the object of pursuit by Franco’s grinning villain. Truitt’s Eli finds a mysterious weapon, shaped a bit like a briefcase and possessing mystical powers, and that weapon becomes the brothers’ sole protection as they try to evade Franco and federal agents — after Eli zaps Franco’s criminal with the extraterrestrial weapon.

“I know I’m not a good guy, but it’s been pretty incredible to be brothers for the first time,” Reynor tells Truitt in trailer.

Lionsgate bought the movie at the Toronto International Film Festival in 2016 while it was in pre-production. The film is financed by No Trace Camping. Daniel Casey wrote the script, based on the short “Bag Man” by Jonathan and Josh Baker.

21 Laps’ Shawn Levy and Dan Cohen produced with No Trace Camping’s Jeff Arkuss, David Gross, and Jesse Shapira. Levy introduced the trailer Thursday during the Lionsgate presentation at CinemaCon in Las Vegas. Lionsgate’s trailer has the tagline, “No bond is stronger than family.”

The short premiered at SXSW 2015. Quaid plays the father of the brothers and Kravitz portrays a woman who joins the pair on the run. The film opens Aug. 31. Watch the trailer above.