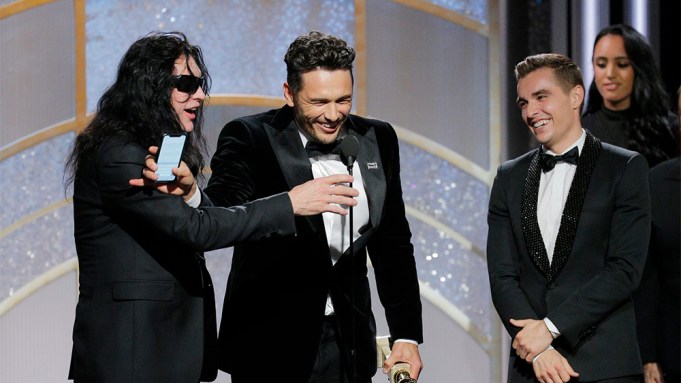 James Franco scored his second Golden Globe win Sunday night, winning best actor in a comedy or musical for “The Disaster Artist.” He had promised “The Room” director he would bring him onstage if he won, and he made good on the promise.

Franco directed and starred in the picture, which tells the story of how Wiseau, an eccentric and enigmatic aspiring filmmaker, made the cult hit, “The Room.” Franco earned praise for his portrayal of Wiseau, a Hollywood outsider who self-financed the film he both starred in and wrote.

Franco brought Wiseau onstage along with his brother Dave Franco, who co-stars in the film. Franco wouldn’t let the famously erratic Wiseau speak at the podium, but Franco explained that the honor is fitting since 19 years ago Wiseau was stuck in traffic due to the Golden Globes when he decided, “Who cares, I was not invited anyway, I will make my own movie.”

“This was billed as the movie about making the best worst movie ever made,” continued Franco, “but in fact it’s a story about friendship,” he said, thanking Seth Rogen and others involved in the film. Finally, he thanked his brother Dave, saying, “I always wanted my own Coen brothers, now we have our own Franco brothers. Thanks to my mother for giving him to me.”

Franco topped Daniel Kaluuya for “Get Out,” Steve Carell for “Battle of the Sexes,” Ansel Elgort for “Baby Driver,” and Hugh Jackman for “The Greatest Showman.”

Franco, 39, previously won a Golden Globe for best actor in a miniseries or motion picture for television in 2002 for “James Dean.”