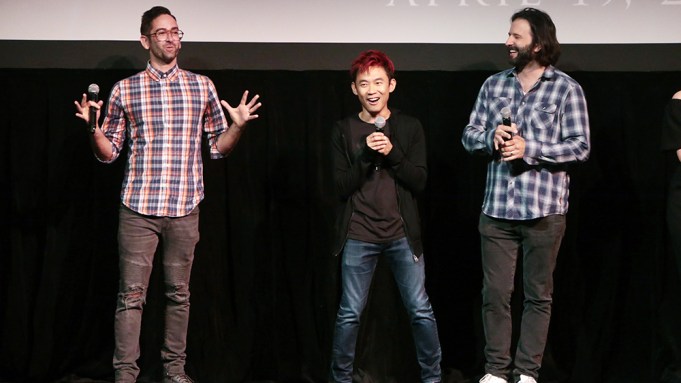 The Warner Bros. label kicked off San Diego Comic-Con with its second annual Scare Diego, a panel so frightening a live cockroach skittered across the stage, terrifying both convention-goers and a horror mainstay, director James Wan.

New Line brought footage from three future films including “The Nun,” “The Curse of La Llorona,” and the film most fans were waiting with baited breath for, “It: Chapter Two.” Sadly, no one from the “It” sequel was in attendance at Comic-Con. However, a behind-the-scenes glimpse into the film’s current production was screened.

Returning director Andy Muschietti appeared on screen and dedicated a short reel of footage to the Scare Diego fanatics, promising that this film will be even more horrific than the last. “It’s gonna be scarier,” said Muschietti. “It’s gonna be a more intense experience, so bring your adult diapers to the theater.”

While the actual “It 2” goodies were kept under wraps, fans went nuts when a clip showing Bill Hader playing adult Richie Tozier, giving his best “Stranger Things’” Finn Wolfhard. Mimicking the younger actor’s lip chewing pretty perfectly, Hader entered the scene with a, “Sup losers! Sooooo… what do you guys want to talk about?”

Next up was “The Curse of La Llorona” a ’70s-set feature centered on the famous Mexican folklore of the weeping woman. For the uninitiated, director Michael Chaves briefly described the famous ghost. “If you’re Hispanic you probably heard [this story] from your abuela. And she told it, usually with a warning of, ‘you’d better be good, you’d better behave or La Llorona is gonna get you.’ It’s been passed down through generations. It’s been scaring kids for years.”

Legend has it, a woman with two children and a seemingly perfect life was so distraught after she caught her husband cheating that she drowned her two kids. When she realized what she’d done, she threw herself in a river. After that, she was cursed to walk the earth forever looking for replacement children.

Representing the story of La Llorona correctly was clearly important to the cast, many of whom professed they 100% believed in the spirit. “This has been done with so much respect, you will be so proud,” said cast member Patricia Velasquez.

The timeliness of the story about a spirit separating kids from their parents was not lost on actor Raymond Cruz. “It’s a very timely film. It takes place in the ’70s, but La Llorona predates Trump by 200 years of separating Mexican children from their parents,” said Cruz.

Following “La Llorona” was the cast and crew of “The Nun” freaking the hell out of the audience by filling the auditorium with actors in costume as nuns. The horror movie, which debuts on Sept. 7, 2018, fills in the backstory for the nun character created in Wan’s “The Conjuring” series.

Director Corin Hardy presented some truly terrifying footage filmed on location in Romania, where he had his own supernatural experience. Hardy swears that while filming “The Nun” in an ancient European castle, he ran into not one, but two ghosts on the set.

The night closed with the news of yet another “Annabelle” film in production, thus marking the third movie in the “Annabelle” series. Gary Dauberman will direct the new film, set inside the Warren’s infamous artifact room. Wan joked that this flick was basically “A Night in the Museum” but with Annabelle. The next addition to New Line will open next summer.