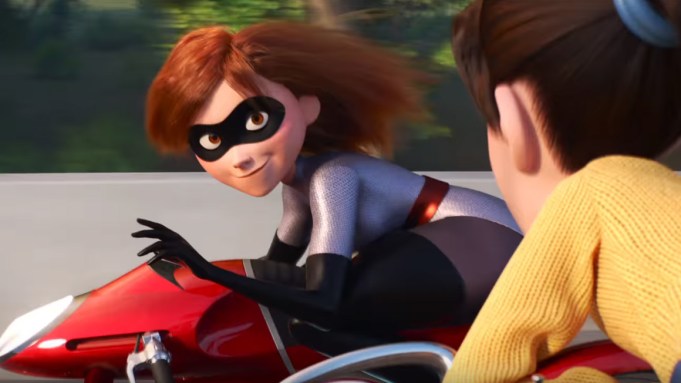 Disney-Pixar released a sneak peek of the highly anticipated “Incredibles 2” during NBC’s Olympics coverage Wednesday night, and it looks like it’s time for Mr. Incredible to put in some hours at home while Elastigirl resumes her superhero duties.

In the trailer, the mysterious “tycoon” Winston Deavor — voiced by Bob Odenkirk — touts his ability to help supers resume their heroic duties, despite superheroes’ continued illegality. But it seems Deavor is more interested in Elastigirl than Mr. Incredible, and with Jack-Jack still an infant, someone has to stay at home and monitor his budding superhero abilities.

“I’ve got to succeed, so she can succeed,” Bob explains.

While Elastigirl whizzes around impressing bystanders on her new motorcycle, Bob dodges Jack-Jack’s laser beams and battles children’s book-induced fatigue. The trailer sees the return of fan favorites Edna Mode, voiced by Brad Bird — who also directed the film — and Mr. Incredible’s best friend Frozone a.k.a. Lucius Best, voiced by Samuel L. Jackson, both of whom try to give Mr. Incredible super-child-rearing advice.

Holly Hunter and Craig T. Nelson return as the voices of Elastigirl and Mr. Incredible, respectively, with newcomer Huck Milner as “Dash” Parr and Sarah Vowell returning as Violet Parr.