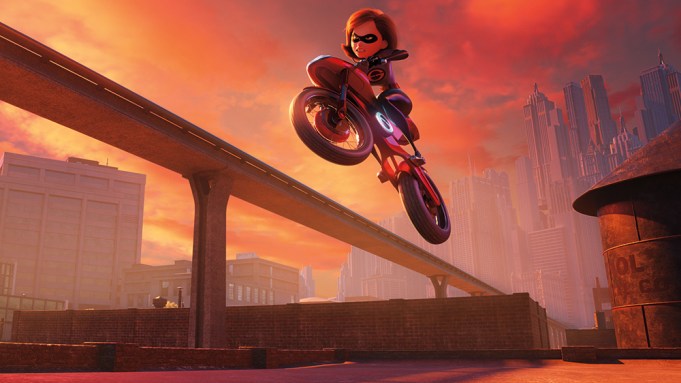 Disney-Pixar’s “Incredibles 2” soared to a record-setting $18.5 million on Thursday night.

The preview number is more than double the previous record for an animated movie, which was set by “Finding Dory” in 2016 with $9.2 million.

“Incredibles 2” has been forecast to gross between $125 million and $140 million this weekend at 4,410 domestic locations. The record-holder for best opening weekend ever for an animated pic is also “Finding Dory,” which launched in 2016 with $135 million.

“Incredibles 2” already boasts a 94% fresh rating on Rotten Tomatoes. The sequel picks up directly following the events of the original film, with the Parr family attempting to juggle a normal life with superhero responsibilities. Holly Hunter’s Elastigirl takes center stage as she is recruited to lead a campaign to bring Supers back after superheroes are forced to permanently conceal their identities.

The film was written and directed by Brad Bird, who also wrote and helmed “The Incredibles” and “Ratatouille.” “Incredibles” opened in 2004 with $70.5 million, the second-largest opening at the time for an animated feature. It went on to win the Oscar for best animated film and earn $633 million worldwide.

“Incredibles 2” should represent a rebound for Disney after “Solo: A Star Wars Story” under-performed earlier this summer. “Solo” has taken in $182 million domestically in its first 20 days — far less than the three previous “Star Wars” titles.

Warner Bros.’ “Tag” is targeting a debut between $12 million and $16 million at 3,382 theaters. The movie, based on a Wall Street Journal article about a group of grown men who play a longstanding game of tag, also stars Jake Johnson and Jon Hamm.

Sony’s “Superfly” remake buzzed to $1.2 million at 2,200 North American locations on its opening day on Wednesday. The studio said the crime drama remains on track to reel in $10 million to $12 million over the next five days.

Warner Bros.’ second weekend of “Ocean’s 8” will probably finish second ahead of “Tag,” with about $20 million after opening in first place last weekend with $41.6 million. The heist comedy passed $59 million in its first week.

The fourth weekend of “Star Wars: A Solo Story” and the fifth frame of Fox’s “Deadpool 2” are likely to battle for fourth place in the $8 million to $10 million range.“Deadpool 2” has topped $284 million in North America in 27 days. The original “Deadpool” grossed $363 million domestically in 2016.