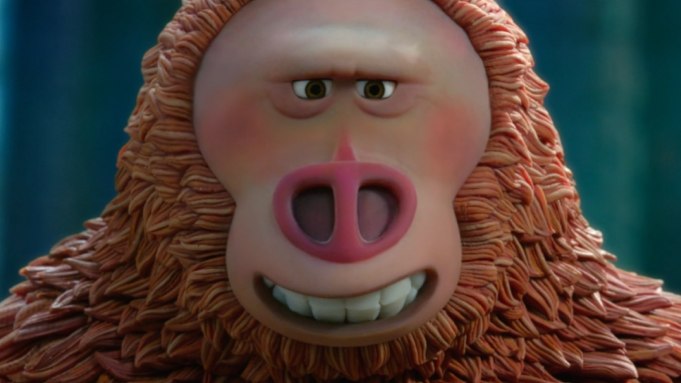 The missing link has been found in the first trailer for Zach Galifianakis’ stop-motion film.

“Missing Link” follows the charismatic Sir Lionel Frost, voiced by Hugh Jackman, as he works to uncover a lost species of animal, linking the human race to its more beastly ancestors. What he finds, however, is a lovable, hairy goofball, voiced by Galifianakis, who wants nothing more than to meet his cousins across the world. Together, the pair embarks on a journey to find more members of the mythical species, meeting a host of wild characters along the way.

Joining Galifianakis and Jackman is Timothy Olyphant, Emma Thompson, Stephen Fry, Matt Lucas and Zoe Saldana who voices fellow adventurer Adelina Fortnight. Throughout the film, each character has their own experience with Galifianakis’ eight-foot tall, 650 pound character who must navigate an unfamiliar human world in a much too small plaid suit.

Legendary stop-motion studio Laika is behind the film, following the release of its most recent project “Kubo and the Two Strings,” which was widely praised. Other movies from the studio include “The Boxtrolls,” “ParaNorman” and “Coraline,” all of which received Academy Award nominations. Chris Butler is directing the film, which is also the first Laika title to be distributed in the U.S. by Megan Ellison’s Annapurna Pictures.

Annapurna has set a spring 2019 release.