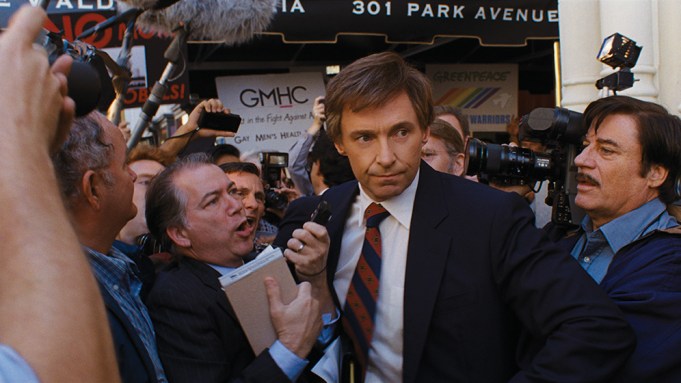 During his chat with Emily Blunt for Variety‘s Actors on Actors, Hugh Jackman said he’ll “never forget” the first time he met politician Gary Hart for the making of “The Front Runner.”

“I do believe our stories in life are probably the most precious thing we own,” Jackman said. Jackman portrayed Hart earlier this year in “The Front Runner,” the story of how Hart’s presidential campaign came crashing down after damning allegations of an extramarital affair were picked up by the press.

“I wanted to meet him mainly because I wanted to look him in the eye and say, ‘I’m taking this really seriously, and I know you’re a family man who’s intensely private, and I can’t imagine how hard it is for all this to come up again,'” Jackman said.

Luckily for Jackman, Hart was on board with the project — and he’s a big fan of “Les Miserables.”

“He was so lovely and so warm,” Jackman said of Hart, who met him at the airport and methodically planned out their week together while Jackman studied how to play him. Jackman described that when he went to stay with Hart and his wife, Lee, Hart put him up in the master bedroom and cleared a space in his wardrobe for Jackman’s clothes.

“I knew he was going to see the movie,” Jackman said, adding that Hart approved of Jackman’s performance. But he was especially pleased with Vera Farmiga’s portrayal of his wife, having left politics to protect his family from the scrutiny and ridicule of the media.

“That first night we had whisky and cigars,” Jackman said of his visit. “We’re friends to this day.”