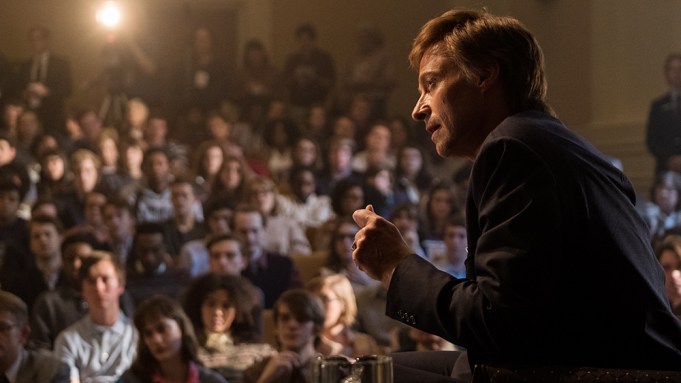 Hugh Jackman brings Gary Hart to life as a presidential candidate in crisis in the first trailer for Sony’s political drama “The Front Runner.”

The footage begins with an ultra-confident Jackman declaring, “I’m Gary Hart, and I’m running for president.”

“The Front Runner” chronicles the rise and fall of Hart, a charismatic U.S. Senator from Colorado, who was considered the frontrunner for the 1988 Democratic presidential nomination when his campaign was sidelined by the story of an extramarital relationship with Donna Rice. In what may have been the first merger of tabloid journalism and political journalism, Hart was forced to drop out of the race.

By the end of trailer, the affair is about to be revealed with as a downcast Jackman warns Farmiga, “There’s going to be a story tomorrow about me.”

Sony Pictures released the trailer Thursday morning, as “The Front Runner” was announced as part of the lineup for the Telluride Film Festival. Sony is planning a Nov. 7 release to coincide with award season and election coverage.

Mamoudou Athie portrays A.J. Parker, a Washington Post reporter. Molly Ephraim is a scheduler with campaign and Sara Paxton plays Rice, the actress and model whose life was also never the same.

Jason Reitman is directing from a script he wrote with veteran political journalist Matt Bai and former press secretary for Hillary Clinton, Jay Carson. It is based on Bai’s 2014 book, “All the Truth Is Out.”