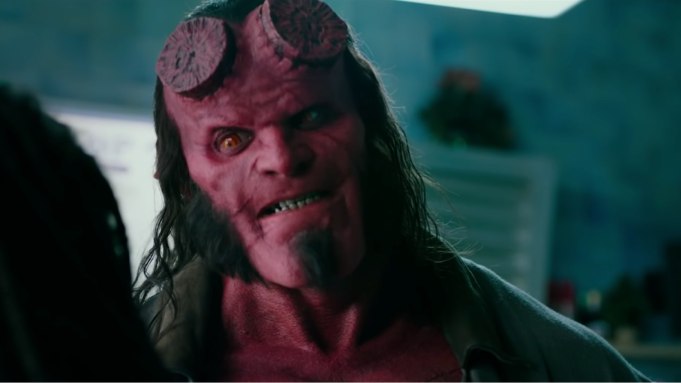 The forces of darkness meet some light comedy and Billy Idol’s”Mony Mony” in the latest trailer for Neil Marshall’s “Hellboy” reboot.

Based on the graphic novels by Mike Mignola, “Hellboy” follows the powerful demon Anung Un Rama (aka Hellboy) as he fights monsters and other demonic creatures while working for the government’s secret Bureau for Paranormal Research and Defense. For this rebbot, “Stranger Things'” David Harbour dons the stubby horns and big red fist and we’ll also see the rise of a vengeful medieval sorceress played by Milla Jovovich.

The trailer begins much like the Del Toro’s previous film iterations – rolling shots of an ancient cave tease the appearance of some sort of magical weapon before transitioning to the invasion of strange bat creatures set to a storm-filled sky. “If there is ever an end in this forever war, it will be because of you, and your strong right hand,” echoes Ian McShane’s voice in the background before Harbour steps in front of the camera for the first time.

But when a soldier accidentally fires a shot at Harbour’s titular character, the trailer leaves behind its dark fantasy roots in favor of comedic quips and blood-soaked battle scenes, set to the up-beat sounds of Billy Idol.

The rest of the trailer features the film’s monstrous lineup of demonic baddies including a ferocious man-bat, a giant skin creature with a sword for its hand and a club-wielding ogre for good measure. Jovovich’s sorceress character also makes an appearance conjuring some sort of storm portal before Harbour closes out the video with his character’s iconic flaming crown.