Harvey Weinstein Accusers Asia Argento and Rose McGowan, Others React to His Arrest: ‘What Took You So Long?’ 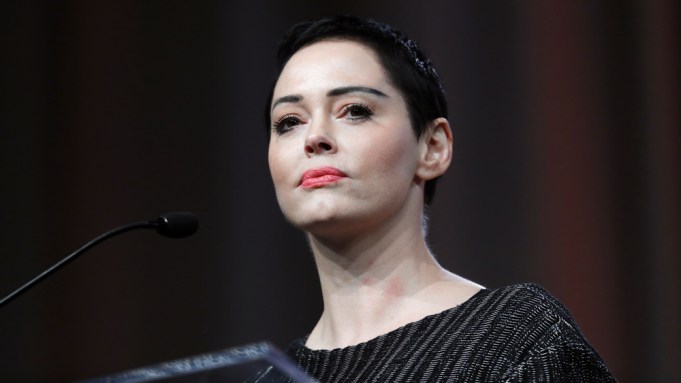 Disgraced Hollywood mogul Harvey Weinstein was formally arrested Friday morning on suspicion of rape, a criminal sex act, sex abuse, and sexual misconduct. Weinstein’s victims, his former industry contemporaries, and media figures flooded social media to remark on the watershed moment for the Me Too movement.

Actress Asia Argento, who accused Weinstein of rape and was one of the first of more than 80 women to go public with her allegations, tweeted throughout the morning as Weinstein surrendered to police in New York City. “Glued to the screen,” she wrote as she live-tweeted his perp walk. “What took you so long Harvey?” she said.

Earlier in the day, the Italian actress wrote that Weinstein’s victims would finally get justice.

“Today Harvey Weinstein will take his first step on his inevitable descent to hell. We, the women, finally have real hope for justice,” Argento said.

Rose McGowan, who has also accused the Hollywood producer of rape, appeared on “Good Morning America” and “Megyn Kelly Today” to discuss her reaction to Weinstein’s arrest.

McGowan also told the Associated Press that she wants to attend Weinstein’s upcoming trials. “Hopefully that will actually heal a lot of the kind of trauma I get whenever I see his face or whenever I hear his name or whenever I have to read or hear that he says it was consensual,” she told AP. She took to Twitter as well, writing, “We got you Harvey Weinstein, we got you.”

We got you, Harvey Weinstein, we got you

The arrest ended months of speculation over whether the famed producer would face criminal charges following decades of alleged sexual misconduct. Weinstein has denied all allegations of nonconsensual sex.

Harvey Weinstein shattered the lives of an untold number of women. We stand with them, and remain in solidarity with women everywhere who have faced unsafe and abusive workplaces. We look forward to seeing justice prevail. (2/2)

Today is a day I never thought I’d see when I came forward 22 months ago alone. Thank you for listening to women. https://t.co/KoTe2JkKEs #justice #befierce #standup #speakup #metoo #timesup #HarveyWeinstein

What’s on the menu for #Weinstein @AsiaArgento pic.twitter.com/JghdzkqDgv

We’re in the courtroom waiting for Weinstein. For so long he had his own private system— fancy lawyers who paid to silence women, private investigators and spies. Now he answers to the same system as the rest of us. pic.twitter.com/ajxYCwhATw

Harvey Weinstein looking forward to the next chapter of his career, negotiating multi-million dollar distribution deals for loose cigarettes and shampoos.

We opened with “Celebration” on the show this morning to celebrate that little-eyed monster Harvey Weinstein turning himself into the police. I just wish there had been no bail.

harvey weinstein is being served justice. but it could have been otherwise. THANK YOU @rosemcgowan. THANK YOU @AsiaArgento. thank you to EVERY SINGLE women who has raised her voice and told the truth and refused to be shut up by a broken system. LET. PROGRESS. RING.

“I represent many accusers of Harvey Weinstein, both in lawsuits and in claims in bankruptcy court. It is long overdue for him to be required to face the bar of justice, but that day has finally come,” Gloria Allred said in a statement. “I commend the courage of all those who have come forward and who have had the courage to speak their truth to a rich, powerful famous man. We look forward to a just result.”