Harvey Weinstein Charged With Rape and Other Sex Crimes, Barred From Travel 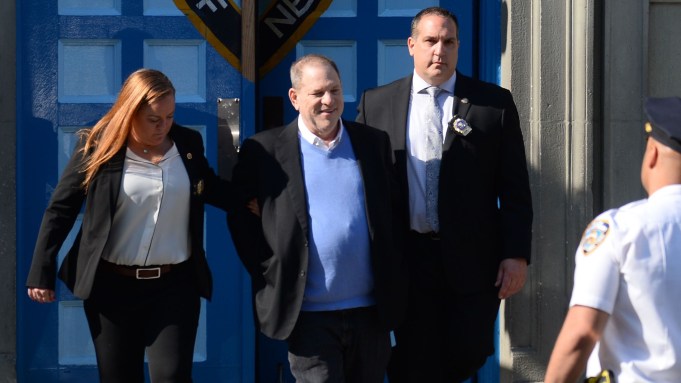 UPDATED: Disgraced mogul Harvey Weinstein was formally arrested and charged Friday with rape and other acts of sexual misconduct, the latest development in the stunning downfall of a powerful producer whose taste and bullying persona once defined independent film.

Weinstein’s bond was set by a Manhattan court at $10 million. He paid $1 million in a cashier’s check to post bail, and agreed not to travel outside of New York State and Connecticut without advance permission from the court. He also agreed to wear a GPS-enabled monitoring device.

Wearing a dark jacket and clutching a small stack of books, Weinstein, 66, turned himself in to police in downtown New York shortly before 7:30 a.m., at a precinct besieged by reporters and news cameras. An hour later, just before 9 a.m., he left the police station in handcuffs.

Shortly afterward, he appeared in a Manhattan courthouse in the company of his lawyer, Benjamin Brafman, and surrendered his passport. Weinstein remained mostly silent throughout the proceedings, standing quietly as prosecutor Joan Illuzzi-Orbon described him as using his “position, money and power to lure young women into situations where he was able to violate them sexually.” Weinstein was arraigned on charges of first degree rape, forcible oral sex, and third degree rape. Brafman entered a not guilty plea.

The charges involve two alleged victims. The first is Lucia Evans, who came forward last fall with allegations that Weinstein forced her to perform oral sex at his Tribeca office in 2004. The rape charge concerns a woman who has not been identified, who alleges that Weinstein held her against her will at a Manhattan hotel room in 2013. According to the complaint, Weinstein forced the woman to have sex though she “had clearly expressed her lack of consent to the act.” The judge issued a protective order Friday, barring either side from releasing the woman’s name.

Manhattan District Attorney Cyrus Vance has been under pressure to prosecute Weinstein, after declining to file a misdemeanor case involving an alleged groping of an Italian model three years ago. In a statement Friday, Vance said the case is active and ongoing, and urged other victims to come forward. The New York Police Department issued its own statement, offering thanks to “these brave survivors for their courage to come forward and seek justice.”

The two most serious charges — first degree rape and forcible oral sex — are Class B felonies in New York. Weinstein faces up to 25 years in prison if convicted.

“We intend to move very quickly to dismiss these charges,” Brafman said in a brief news conference outside the courthouse. He added that Weinstein has maintained that all sexual activity he engaged in “was consensual.”

Brafman later issued a statement alleging that the charges are “legally flawed and not supported by credible evidence.”

“Mr. Weinstein has always maintained that he has never engaged in non-consensual sexual behavior with anyone,” Brafman said. “Nothing about today’s proceedings changes Mr. Weinstein’s position. He has entered a plea of Not Guilty and fully expects to be exonerated.”

News crews had arrived at dawn Friday at the New York Police Department’s first precinct in Tribeca to capture the arrival of a man once accustomed to the flash of cameras and clamor of reporters on the red carpet. Officers set up barricades to try to contain the thicket of news media.

Weinstein’s arrest comes after more than 80 women accused him of sexual misconduct last fall, sparking an anti-harassment movement that spread around the world and exposed cultures of complicity in entertainment, media, sports and politics. Yet even as the stories piled up, the allegations against Weinstein stood apart, painting a portrait of a man for whom sexual assault had become a routine, enabled by his handlers and his unquestioned power in Hollywood.

In the New Yorker, Evans said Weinstein had forced her to perform oral sex during an audition in New York. “I said, over and over, ‘I don’t want to do this, stop, don’t,'” she said. But she said Weinstein simply ignored her and later acted as if nothing had happened. Paz de la Huerta said Weinstein raped her twice in her apartment. “I was so terrified of him,” she told Vanity Fair. “I did say no, and when he was on top of me I said, ‘I don’t want to do this.’ He kept humping me and it was disgusting. He’s like a pig.”

Weinstein’s alleged misconduct was one of the biggest open secrets in Hollywood. Yet he eluded public accountability for decades, protecting himself through secret payoffs and non-disclosure agreements. He allegedly threatened the careers of women who turned him down, and wielded such influence that the threats were taken seriously. The one woman who did report him to the police, Italian model Ambra Battilana, was smeared in the tabloids before prosecutors decided they did not have enough evidence to file a charge.

Ronan Farrow began to investigate the story last year, and soon Jodi Kantor and Megan Twohey of the New York Times joined in the pursuit. The Times’ investigation, published on Oct. 5, 2017, alleged that Weinstein had paid at least eight accusers for their silence. Farrow’s story appeared in the New Yorker five days later, including vivid and harrowing accounts from 13 women, including actresses Asia Argento, Mira Sorvino and Emma de Caunes. Soon, actresses such as Gwyneth Paltrow and Angelina Jolie gave their own accounts of unwanted advances.

Weinstein fled to Arizona, where he hunkered down and promised to get treatment. As new allegations emerged in a string of lawsuits and news reports, he issued blanket denials that he had ever engaged in non-consensual sex. He also came to see himself as a scapegoat, unfairly singled out for the sins of powerful men everywhere.

Police agencies in Los Angeles, New York and London opened criminal investigations, while his company was forced into bankruptcy.