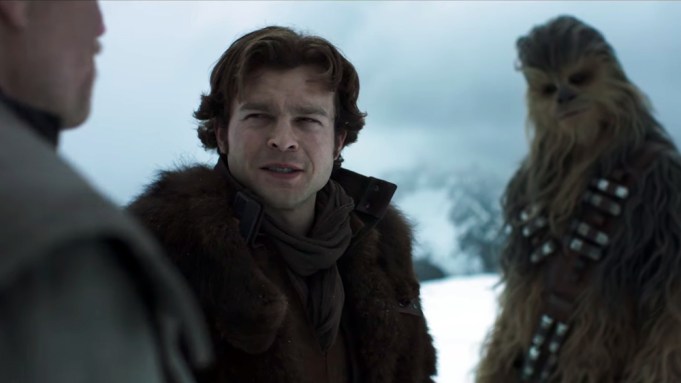 Disney and Lucasfilm released a teaser trailer for the Han Solo spinoff, “Solo: A Star Wars Story,” during “Good Morning America” on Monday.

The official teaser follows a 40-second spot that aired during the Super Bowl on Sunday.

The film centers on the galaxy’s favorite smuggler, Han Solo (Alden Ehrenreich), and his trusty Wookie companion, Chewbacca (Joonas Suotamo), during some of their early adventures, including meeting another fan favorite, Lando Calrissian (Donald Glover). Billy Dee Williams first played Calrissian in “The Empire Strikes Back” and “Return of the Jedi.”

Ehrenreich steps into the iconic role made famous by Harrison Ford in earlier “Star Wars” movies.

In the voiceover of the trailer, Solo says he’s been running scams since he was 10 years old and was kicked out of the flight academy for “having a mind of my own.” “I’m gonna be a pilot — the best in the galaxy,” he adds.

He then meets Woody Harrelson’s Beckett, who tells him that he’s putting together a crew. “You in?” he asks

He’s later seen at the helm of the Millennium Falcon on what appears to be Beckett’s mission.

“I thought we were in trouble there for a second, but it’s fine. We’re fine,” Solo says before encountering another near-death experience while navigating the ship through giant octopus-like space monsters.

“Solo: A Star Wars Story” was directed by Ron Howard and penned by Lawrence Kasdan, who wrote three other films in the franchise, and Jon Kasdan.

Howard took over as director in August when Phil Lord and Chris Miller were fired after clashing with Lucasfilm chief Kathleen Kennedy and co-writer/executive producer Kasdan.

The movie hits theaters on May 25.