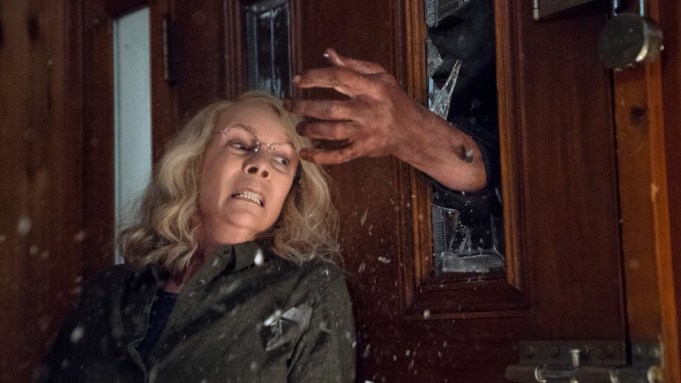 Universal Pictures dropped the first eerie trailer for its “Halloween” reboot on Friday.

Most notably, the reboot features Jamie Lee Curtis reprising her role as Laurie Strode, who famously escaped the edge of Michael Myers’ blade in John Carpenter’s original 1978 slasher pic and landed Curtis a spot on the Hollywood A-list. Curtis isn’t alone, though, as Nick Castle also returns to stalk and loom over victims as Myers. Curtis appeared in “Halloween II,” “Halloween H20: 20 years Later,” and “Halloween: Resurrection,” but the reboot will be Castle’s first time donning the infamous bedraggled mask since the original “Halloween.”

The new trailer introduces Castle as a prisoner laughing hysterically at a Myers mask, then switches to a grim Curtis at target practice and asserting, “I pray every night that he would escape.”

“Why the hell did you do that for?” asks the town sheriff, played by Will Patton.

Carpenter serves as the reboot’s executive producer, along with horror movie maestro Jason Blum. The film is directed by David Gordon Green, who co-wrote the script with actor Danny McBride. The pic is being produced by Trancas International Films, Blumhouse Productions, and Miramax.