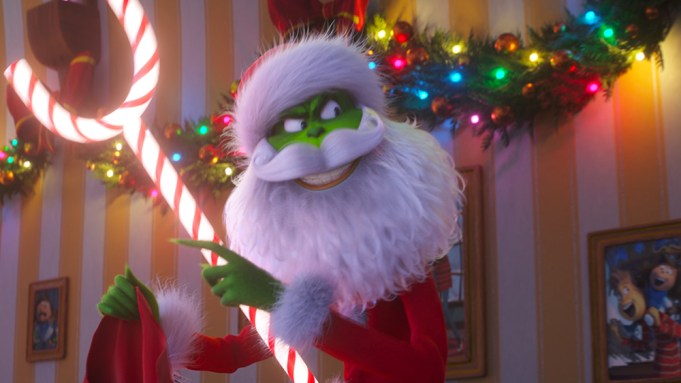 “The Grinch” has opened with a merry $2.2 million at 3,200 North American locations on Thursday night.

Universal-Illumination’s holiday-themed animated comedy, which began showings at 6 p.m., is expected to gross between $55 million to $65 million this weekend when it expands to 4,140 screens. “The Grinch” should dominate moviegoing over the second weekend of “Bohemian Rhapsody,” and the launches of thriller “The Girl In the Spider’s Web” and World War II horror tale “Overlord.”

“The Grinch” is the second Dr. Seuss story that Illumination has brought to the big screen following 2012’s “The Lorax,” which launched domestically with $70 million and grossed $348 million globally. Both “The Grinch” and “The Lorax” carried production budgets around $75 million. Jim Carrey’s live-action “How the Grinch Stole Christmas” grossed $345 million worldwide for Universal.

Sony’s “The Girl in the Spider’s Web,” starring Claire Foy as the vengeance-seeking Lisbeth Salander, made $635,000 from Thursday night previews at 2,620 locations. It’s eyeing a start between $10 million to $15 million from 2,929 venues. It’s the second film in the series, coming seven years after David Fincher’s “The Girl With the Dragon Tattoo,” starring Rooney Mara, generated $230 million worldwide. “Spider’s Web,” directed by Fede Alvarez, carries a $43 million budget.

Paramount’s “Overlord” scared up $900,000 from 2,330 locations in Thursday night previews. It has been forecast for a debut between $8 million and $13 million at 2,859 venues. J.J. Abrams produced the film, which follows a handful of American soldiers dropped behind enemy lines just before D-Day, who take on Nazis conducting nightmarish experiments.

Fox’s “Bohemian Rhapsody,” which over-performed in its opening weekend, with $51 million, should wind up with another $25 million to $30 million in its sophomore frame. The 2018 North American box office had reached $9.92 billion as of Nov. 7, an impressive 10.1% increase over 2017, according to comScore.

“The home stretch of the box office year is officially in play as the holiday movie season gets off to an early start with ‘The Grinch’ being joined by two very counter-programmed titles, ‘The Girl in the Spider’s Web’ and ‘Overlord,'” said Paul Dergarabedian, senior media analyst with comScore.

“These newcomers are tasked with maintaining the 10% advantage over the 2017 box office in the face of upcoming comparable weekends for the month of November last year when strong performances of releases such as ‘Thor: Ragnarok,’ ‘Justice League,’ ‘Coco,’ and others may cause that advantage to erode a bit over time, but not diminish the likelihood of a record-breaking year of 2018 at the multiplex,” he added.