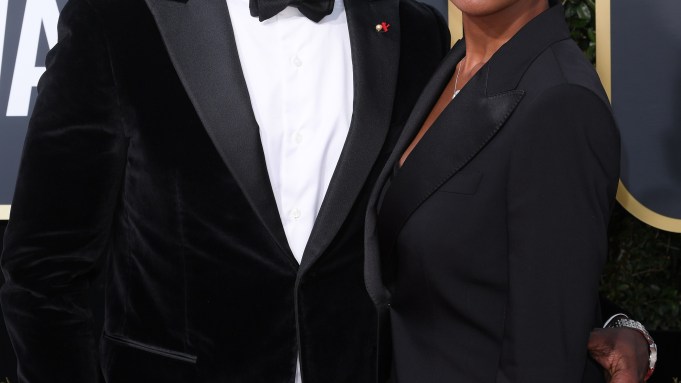 As expected, stars of film and television blacked out the red carpet of the Golden Globes on Sunday.

Women and men across the industry wore black in support of the #MeToo movement and gender equality in light of the recent wave of Hollywood sexual harassment allegations. Many on the carpet also wore pins supporting Time’s Up, an initiative recently founded by 300 prominent women in entertainment to fight harassment and abuse in the workplace. The group, led by stars like Reese Witherspoon, Shonda Rhimes, Kerry Washington and America Ferrera, was the one to organize the all-black carpet and took the message to social media with #WhyWeWearBlack.

“The Beauty and the Beast” star, who brought women’s activist Marai Larasi as her date to the ceremony, said the movement made her very emotional and added, “You realize if you speak to most women, they have an experience, they have a story, and we’re just scratching the surface of this which is really crazy.”

“Glow” star and Golden Globe nominee Alison Brie said she chose to wear black “to stand in solidarity with all the women who have come out about being sexually harassed and abused. I’m so in awe of the bravery it took for the first few to come forward. They are heroes.”

She also emphasized the importance of Time’s Up fighting to protect women across all industries, and noted how she’s “feel really proud to be a part of it.” Her outfit featured close-fitting trousers under a strapless black gown.

“13 Reasons Why” star Katherine Langford, in a sequin-accented black gown, said that the black dress movement was “a very big gesture but it’s part of a larger thing that we’re doing.”

“It’s supporting work that’s already been done by so many people over such a large period of time,” the nominee told Variety. “Tonight is special for the Time’s Up movement, which is supporting equality not just for women but also for men and all non-binary people across every industry.”

Stars showcased a number of variations on the black look, from strapless gowns (worn by Meryl Streep and Yvonne Strahovski) to sequins and lace looks (worn by Langford and Emma Stone) to a pants trend (worn by “The Crown” nominee Claire Foy, Brie and Debra Messing). Men joined in on the statement in black tuxes, many in all-black, including Nick Jonas and Justin Timberlake.