HFPA President Weighs in on Oscar Changes: ‘They Have to Do Something to Keep the Viewers’ 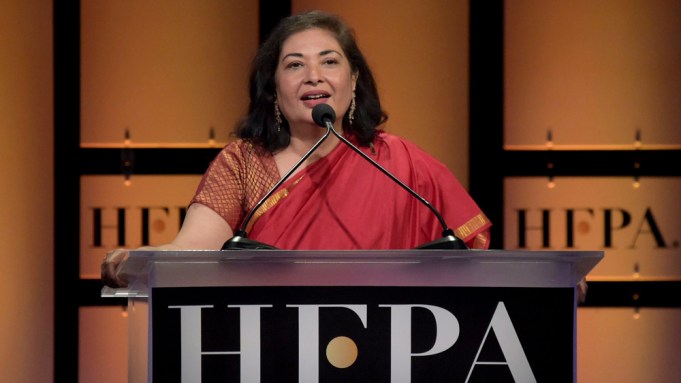 The Hollywood Foreign Press Association knows what it takes to put on a major televised awards show — they do it every year with the Golden Globes.

So, it’s no surprise that HFPA president Meher Tatna understands why the Academy of Motion Picture Arts and Sciences is shaking up the Oscar rulebook again.

“I feel for them,” Tatna told Variety on Thursday night at the HFPA’s annual grants banquet at the Beverly Hilton Hotel. “They have to do something to keep the viewers engaged and this is what they thought was a good idea.”

.@LenaWaithe explains why she cut her hair: "I felt like I was holding onto a piece of femininity that would make the world feel comfortable with who I am" #HFPA pic.twitter.com/GTlxZJ11uO

Most of the stars who Variety chatted with at the banquet said they were confused by the Academy’s addition of the new popular film category.

“Is it based on money?” Connie Britton asked. “Is that how you judge popular? I don’t like that.”

John Cho said it’s hard to formulate an opinion on the controversial new category because, “I don’t even know what that means. I’m waiting for a definition of what popular is. … I do think there is a lot of great filmmaking going on and stuff that we don’t consider arthouse cinema and that’s cool by me to recognize, but, popular, I don’t know what that is.”

Many Hollywood insiders are speculating that the popular category is meant to attract stars of blockbusters like “Black Panther” and other Marvel films to attend the telecast amid flagging ratings.

“I imagine it’s to get the younger viewers, the ones that don’t watch the small movies,” Tatna said. “I have no idea if it will work. We’ll have to wait and see.”

The Academy also announced that it would keep the Oscar telecast to three hours and that certain below-the-line categories would be handed out during commercial breaks.

Tim Robbins balked at the changes. “I think if you look at editing, for example, it’s absolutely an essential part of filmmaking,” the Oscar winner said. “A great editor can make a film amazing. Who is deciding what are the creative categories that should be celebrated in front of people?”

Tim Robbins is just as confused as we are about the "popular film" category #HFPA pic.twitter.com/MPpi7OShIw