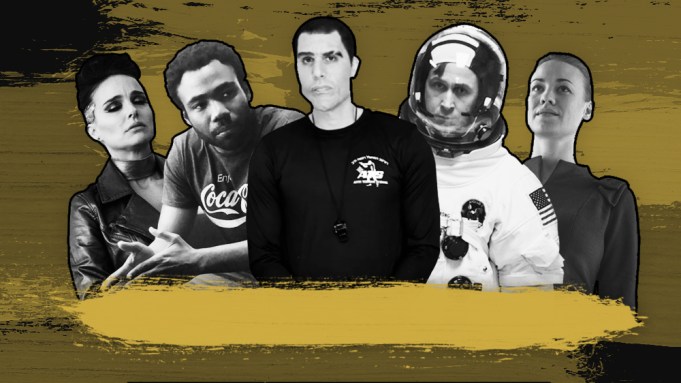 The Golden Globe nominations always offer a few curveballs, and Thursday morning’s announcement was no exception. The movie with the most nominations was “Vice” (with six), beating out “A Star Is Born,” “Green Book,” and “The Favourite” (with five apiece). Meanwhile, on the television side, voters favored quite a few freshman series from across the pond, including “The Assassination of Gianni Versace: American Crime Story,” with a leading 10 total noms, “Bodyguard,” “Killing Eve,” and “A Very English Scandal.”

“Black Panther” managed to emerge as a best picture drama contender, although the Hollywood Foreign Press Association — a group of about 100 foreign journalists — overlooked its director Ryan Coogler and its supporting actor Michael B. Jordan. And the organization still has ways to go when it comes to inclusion. For the second consecutive year, no women were nominated for best director on the film side.

Here, Variety breaks down the 22 biggest snubs and surprises:

SNUB: Julia Roberts, “Ben Is Back”
Roberts was expected to be a double nominee: not only for her Amazon Studios TV show “Homecoming” (where she was nominated), but also for “Ben Is Back.” In the movie directed by Peter Hedges, she gives one of her best performances since “Erin Brockovich” as a mother of a recovering addict (Lucas Hedges). But the best actress in a drama category was too crowded.

SNUB: Ryan Gosling, “First Man”
Coming into the fall season, Damien Chazelle’s biopic about Neil Armstrong was considered an awards-season frontrunner, due to strong reviews out of Telluride and Toronto. But the Universal Pictures release crashed at the box office, and the HFPA didn’t nominate it for best drama, best director, or best actor for Ryan Gosling.

SNUB: Nicole Kidman, “Boy Erased”
Like Roberts, Kidman also had a shot at two nominations this year. In addition to best actress in a drama for “Destroyer,” many thought she could get a supporting nod for playing the Baptist mother of a teenager sent to gay conversion therapy in “Boy Erased.”

SNUB: Natalie Portman, “Vox Lux”
When the HPFA asked a few weeks ago that Portman be submitted for lead actress in a drama — instead of supporting — for playing a pop star in the drama “Vox Lux,” it looked like a sign that she’d be nominated. Instead, they moved her to a packed category where she had no shot of breaking through.

SNUB: Toni Collette, “Hereditary”
After winning the Gotham Award for best actress, the venerable Collette didn’t get any love from the Globes for her terrifying Sundance box office hit. Then again, 18 years ago, she wasn’t nominated for a Golden Globe for “The Sixth Sense,” either, but still managed to make a comeback at the Oscars.

SNUB: Viola Davis, “Widows”
It’s a shame that Davis didn’t score a Golden Globe nomination — it would have been her sixth — for Steve McQueen’s drama, where she portrays a widow who masterminds a robbery with a group of other women.

SNUB: Ryan Coogler, “Black Panther”
Nor did they honor the director of the biggest box office hit of the year, although the groundbreaking Marvel movie earned a rare (for a comic-book movie) best picture drama Golden Globe nom. Also snubbed: Michael B. Jordan, who received some of the best reviews in the genre since Heath Ledger in “The Dark Knight.”

SNUB: “Atlanta”
While the TV comedy series category was increasingly competitive this year, it seems implausible that the boundary-breaking FX comedy wouldn’t make the cut. Not only was it the 2017 winner in the category, but it turned in a stellar second season that asked all of its actors to raise the bar.

SNUB: “The Handmaid’s Tale”
Elisabeth Moss and Yvonne Strahovski both saw nominations (for leading drama actress and supporting drama actress, respectively), but the series did not. It was last year’s winner in the category, so to drop so far so fast seems like a true sign of the times of peak TV.

SNUB: “Maniac”
Netflix’s trippy, genre-bending limited series may not have proven to be as buzzy as the streamer probably hoped when it was first dropped this fall, but the star power alone seemed enough to push it onto the ballot. Both Jonah Hill and Emma Stone (who got in for “The Favourite”) are bonafide movie stars making the jump to the smaller screen, which is normally a recipe for accolades from the HFPA.

SNUB: Sterling K. Brown, “This Is Us”
The Emmy-winning “This Is Us” actor has turned in emotional performances, whether he is delivering speeches to his kids about what it means to be a part of a family or to an auditorium full of disgruntled citizens deciding on voting for city council members. His character on the NBC drama may have swayed those voters, but unfortunately, unlike the last two years, Brown didn’t win over the HFPA.

SNUB: Ted Danson, “The Good Place”
The veteran actor has been an HFPA favorite in the past, scoring 11 nominations and three wins, but he has never seen recognition for his role as the charmingly demonic Michael on NBC afterlife comedy “The Good Place.” This year the show itself scored recognition, as did leading lady Kristen Bell, but not Danson. As the heart of the show, that just feels wrong.

SNUB: Issa Rae, “Insecure”
The creator and star of HBO’s “Insecure” has been on the ballot for the past two years so maybe the HFPA just didn’t want to go for too many repeats. But after receiving an Emmy nomination earlier this year, she certainly seemed poised for more accolades. Her work has only gotten more emotional and complex as her character has been tasked with dipping her toe back into the dating pool and attempting to change careers.

SNUB: “GLOW”
For the second year in a row, the Netflix 1980s wrestling comedy missed out on scoring a series nomination, though its leading lady Alison Brie broke onto the ballot for lead comedy actress. The second season seemed likely to be recognized, given how more fully fleshed out the whole world was, even going so far as to do a special, standalone episode dedicated to the show-within-the-show.

SURPRISE: Rosamund Pike, “A Private War”
The “Gone Girl” star has been getting strong reviews for playing journalist Marie Colvin. But the under-the-radar release just got a big endorsement from the HFPA, as Pike earned a Golden Globe nomination over favorites such as Roberts (“Ben Is Back”), Davis (Widows”), and Portman (“Vox Lux”)

SURPRISE: “The Alienist”
The TNT series not only scored a limited series/TV movie nomination, but one for its star Daniel Bruhl. Although the cabler is insistent on calling the series an anthology, it’s returning for a second season with the same cast in the same roles, which doesn’t fit the traditional definition of a limited series. And after “Big Little Lies” submitted and swept the limited series category last year (only to be renewed for another season), the HFPA announced a rule change that would ask their committee to review submissions and determine category eligibility. Clearly they sided with the network on this one, but it was unexpected.

SURPRISE: “Bodyguard” breaks in
Maybe it shouldn’t be so shocking because the show launched big on the BBC and then only expanded its reach when Netflix snapped it up, but scoring not only for the series but also star Richard Madden was unexpected due to the high-profile projects with which it was competing.

SURPRISE: Stephan James, “Homecoming”
The HFPA loves fresh faces, but historically they have honored newcomers in the comedy race. This year James broke in for his turn on psychological thriller “Homecoming” on Amazon. Most of the attention was on Roberts when the series first launched. While the show’s overall nomination seemed inevitable, his was less certain.

SURPRISE: Sacha Baron Cohen
“Who Is America” is certainly comedic, but it didn’t feel a given that voters would accept it in the comedy category, given that it doesn’t fit the traditional scripted format.