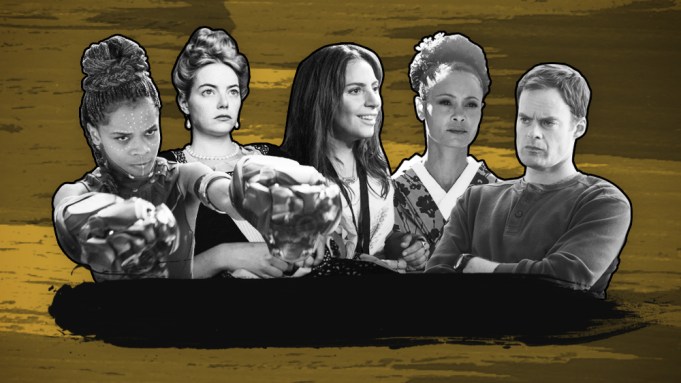 Golden Globes voters were in a political frame of mind on Thursday morning, as the organization behind Hollywood’s wildest awards show handed “Vice,” a scathing look at former vice president Dick Cheney’s career in government, a leading six nominations. On the TV front, members of the Hollywood Foreign Press Association, the group responsible for the Globes, embraced “The Assassination of Gianni Versace,” doling out four nominations to the FX limited series about the fashion designer’s brutal murder.

The awards group also swooned for “A Star is Born,” a backstage romance that’s been a box office and critical smash, as well as “The Favourite,” an offbeat look at royal intrigue in the court of Queen Anne, and “Green Book,” a buddy comedy set in the Civil Rights era. These three films all nabbed five nominations apiece.

Other television shows that had strong showings include newcomers “Barry,” “The Kominsky Method,” and “Homecoming,” programs that are in their inaugural seasons. The trio of shows picked up three nominations, as did the HBO limited series “Sharp Objects,” Amazon’s comedy series “The Marvelous Mrs. Maisel” and the streaming service’s limited series “A Very English Scandal.” FX was the most nominated network with 10 nods. In addition to scoring with “The Assassination of Gianni Versace,” the cable company picked up nominations for “Pose” and the final season of “The Americans.”

“Barry,” “The Marvelous Mrs. Maisel,” and “The Kominsky Method” will compete for the best comedy series prize against “The Good Place,” the NBC afterlife fantasy, and “Kidding,” a new Showtime series that marks Jim Carrey’s return to television. Best drama series will be a race between “Homecoming,” “Pose,” “The Americans,” and two water-cooler favorites, “Killing Eve” and “Bodyguard.”

Unlike its other awards season counterpart the Oscars, the Globes hands out hardware to both movies and TV shows. It also focuses primarily on the actors, showrunners, and directors behind hit projects, with no prizes for cinematographers, editors, and other below-the-line categories. Comedies and dramas are divided for several categories in both film and television.

“Vice” doesn’t open in theaters until Dec. 25 and reviews are still embargoed. Its strong showing with the Globes is good news for the $60 million dramedy, which needs awards attention to attract audiences during the crowded holiday season. It’s also a boon to its distributor Annapurna, which has been dogged by reports of financial turmoil. “Vice” earned nominations for best musical or comedy, and also picked up nods for stars Sam Rockwell, Amy Adams, and Christian Bale, the chameleonic actor who packed on 40 pounds to play Cheney. Annapurna snagged 10 nominations in total, tying with Fox Searchlight for the most nominations by a distributor. The company also picked up three nods for “If Beale Street Could Talk,” a drama about wrongful incarceration, and a nomination for Nicole Kidman’s work as a troubled detective in “Destroyer.” Annapurna is backed by Megan Ellison, the daughter of Oracle founder Larry Ellison.

“Vice” will face off in the musical-comedy category against “The Favourite,” “Green Book,” “Mary Poppins Returns,” and “Crazy Rich Asians.” Best drama will be a match between “A Star is Born,” “If Beale Street Could Talk,” “BlacKkKlansman,” “Black Panther,” and, in something of a twist, “Bohemian Rhapsody,” a biopic about Freddie Mercury that scored at the box office, but enjoyed little love from critics. The category determinations are always head-scratching. Music is fully integrated into both “Bohemian Rhapsody” and “A Star is Born,” but those films will compete as dramas, not musicals.

“Roma,” a family drama by Alfonso Cuaron that is being released by Netflix and is an Oscar front-runner, was deemed ineligible for the Globe’s best drama award because it is a foreign language production. It did pick up a nod for best foreign film, along with nominations for its direction and screenplay.

There were several notable snubs. The Globes nominated “Black Panther,” the Marvel blockbuster that’s been hailed as a barrier-breaking comic book film, but ignored its director Ryan Coogler. Likewise, Sam Elliott, considered to be a leading supporting actor contender for his work as a wounded road manager in “A Star is Born,” was overlooked. On the small screen, “Atlanta,” a comedy about an aspiring rapper, was largely shut out, picking up a single nomination for creator Donald Glover’s lead performance. Also sitting on the sidelines:  “This is Us.” The NBC multi-generational sudser had a bad showing, failing to score a single nomination despite its ratings dominance.

On the eve of nominations, the Globes announced that “Killing Eve’s” Sandra Oh and “Brooklyn Nine-Nine” star Andy Samberg will co-host the ceremony, which is set to air Jan. 6 on NBC. Oh is also up for a Globe for her work as a detective obsessed with capturing a hit woman on “Killing Eve.”

The Globes are an essential stop on the awards season tour, but they are a spotty predictor of future Oscar success. Last year, the HFPA handed out the best drama prize to “Three Billboards Outside Ebbing, Missouri” and the best comedy statue to “Lady Bird.” Neither film won best picture at the Academy Awards. Instead, Oscar voters awarded their top prize to “The Shape of Water.”

Even if its powers of prognostication are iffy, the Globes telecast has become a favorite with viewers. Booze flows freely, and the heavy pour on the champagne results in more unscripted moments involving celebrities than the comparatively staid Oscars — ill-timed bathroom breaks mean stars sometimes fail to accept their awards as they are announced, and performers sometimes appear slightly inebriated while handing out or picking up statues. Moreover, past hosts such as Tina Fey and Amy Poehler and, most infamously, Ricky Gervais, have used their platform to flambé Hollywood pretensions, an approach that would be out-of-step at the more reverential Academy Awards.

If the Globes have become a beloved television institution, the HFPA is viewed as something of a benign embarrassment. The group is comprised of roughly 90 journalists and photographers who report on the entertainment industry for overseas outlets. However, its small size has led to charges that voters are more easily influenced by catered lunches, parties, and access to movie stars furnished by studios looking to curry favor than is the Academy of Motion Picture Arts & Sciences, the group behind the Oscars. The Oscars boasts over 8,000 voting members.

The HFPA has made efforts to clean up its image and practices in recent years, but it still is dogged by controversies involving the personal and professional ethics of some of its members.  In October, an error-filled profile of Drew Barrymore in EgyptAir’s in-flight magazine by former HFPA president Aida Takla-O’Reilly went viral. It was derided for dwelling on Barrymore’s personal life, claiming she was “unstable in her relationships.” Earlier this year, Takla-O’Reilly’s predecessor as HFPA chief, Philip Berk, was publicly accused of sexual harassment by Brendan Fraser. The actor said Berk groped him at a 2003 party. The HFPA’s internal investigation reportedly concluded that Berk had touched the actor inappropriately, but intended it as a joke.

In a sign of the rising creative importance of television, the Globes announced it will present a lifetime achievement award to artists who have distinguished themselves in the medium. The group already presents a career honor for filmmakers and movie stars, known as the Cecil B. DeMille award. This year’s DeMille winner has not yet been announced.

Here is the full list of 2019 Golden Globe nominees:

Best Actress in a Motion Picture – Drama
Glenn Close (“The Wife”)
Lady Gaga (“A Star Is Born”)
Nicole Kidman (“Destroyer”)
Melissa McCarthy (“Can You Ever Forgive Me?”)
Rosamund Pike (“A Private War”)