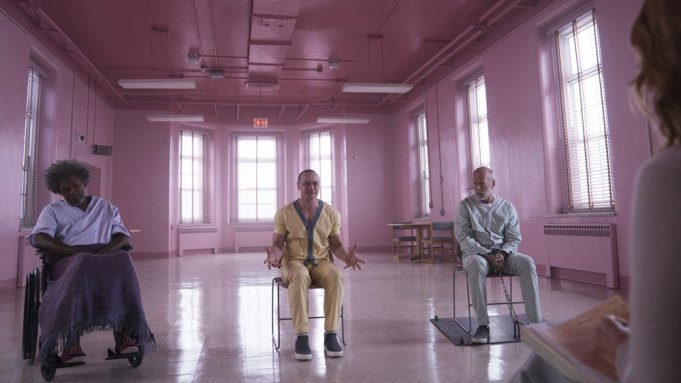 James McAvoy brought personality to San Diego Comic-Con — 24 personalities, to be exact. At a Friday Comic-Con panel, Universal released the trailer for “Glass,” the sequel to 2016’s “Split,” starring McAvoy as Kevin Wendell Crumb, who uses different personas in order to abduct women.

In “Glass,” Sarah Paulson makes her debut in the “Unbreakable” franchise as Dr. Ellie Staple, a psychologist who studies people who believe they are superheroes. Bruce Willis reprises his role from “Unbreakable” as superhuman security guard David Dunn, and Samuel L. Jackson returns as Elijah Price — two of Dr. Ellie’s patients, along with Wendell.

“The three of you have convinced yourselves you have extraordinary gifts like something out of a comic book,” Dr. Staple says to her subjects.

Much of the trailer sees McAvoy’s chameleon character adopt the mannerisms of several different people. Sometimes he is a woman named Patricia, other times he is a nervous man or a predator called the Beast.

“I have no question there are two dozen identities that live in that body with you,” Dr. Staple tells him. “What I am questioning is your belief that you are something more than human.”

Meanwhile, Jackson’s character has taken on a new identity as Mr. Glass, a man with fragile bone structure, but exceptional intelligence.

“This is not a cartoon,” Jackson’s voiceover says. “This is the real world. And yet, some of us still don’t die with bullets. Some of us can still bend steel. I’ve been waiting for the world to see that we exist.”

M. Night Shyamalan returned to direct and write the third film in the “Unbreakable” franchise. Others reprising their roles for the latest installment in the saga include Anya Taylor-Joy as Casey Cooke, Spencer Treat Clark as Joseph Dunn, and Charlayne Woodard as Elijah’s mother.