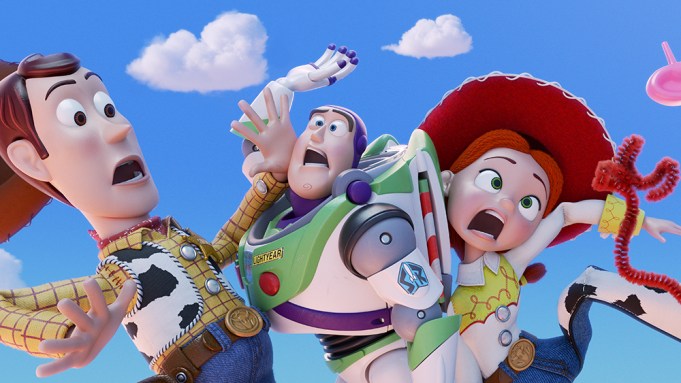 Woody, Buzz Lightyear, Jessie, and crew are back in the first teaser trailer for Disney and Pixar’s “Toy Story 4.”

The footage released Monday also featured Mr. and Mrs. Potato Head, Rex the Dinosaur, Hamm the Piggy Bank, and Slinky the Dog as the characters held hands as Judy Collins’ cover of Joni Mitchell’s “Both Sides Now” plays. There’s no dialogue, that is, until a slightly bizarre new character — an anthropomorphic spork named Forky — enters the scene.

Voiced by Tony Hale, Forky yells, “I don’t belong here!” and tries to leave, which causes the other characters to topple over each other. The new movie sees Woody’s owner Bonnie adding Forky, a reluctant new toy (who is actually a spork-turned-craft-project) to her room.

The voice cast includes Tom Hanks as Woody, Tim Allen as Buzz, Joan Cusack as Jessie, and Don Rickles and Estelle Harris as the Potato Heads. Josh Cooley is directing, and Jonas Rivera and Mark Nielsen are producing.

“Toy Story 4” opens on June 19, 2019 — 24 years after the original “Toy Story,” which was the first fully computer animated feature film and the highest grossing movie of the year. Two sequels were released in 1999 and 2010. Together, they have generated $1.97 billion globally at the box office.

The full trailer will debut with “Ralph Breaks the Internet,” which opens in theaters on Nov. 21. Watch the clip above.