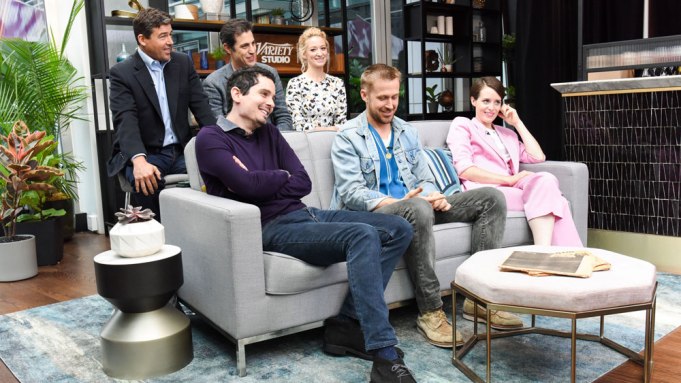 “First Man” director Damien Chazelle and writer Josh Singer defended the film amid controversy over its exclusion of a key moment in the first moon landing: astronaut Neil Armstrong planting the U.S. flag on the moon.

Chazelle said the focus was more on paying “tribute to what this mission took.”

“First Man” stars Ryan Gosling as Armstrong and centers on the years leading up to the Apollo 11 mission. Chazelle directed the movie from Singer’s script, which was based on James R. Hansen’s biography about Armstrong. Chazelle, Singer, and Gosling, as well as other cast members, spoke at the Variety Studio presented by AT&T at the Toronto Film Festival on Monday.

“[The moon landing] cost money, it tore families apart. There was this tremendous sacrifice and loss that came with the success story that we all know,” Chazelle said. “That, in some ways more than anything, was what motivated us — trying to put a human face to that toll and really pay tribute to the people who literally gave everything so that all of us can grow up knowing that people walked on the moon.”

Previously, Chazelle defended the film by saying that even though audiences don’t see the physical planting, there is a scene showing the flag standing on the moon’s surface.

“To address the question of whether this was a political statement, the answer is no,” Chazelle said in a statement on Aug. 31. “I wanted the primary focus in that scene to be on Neil’s solitary moments on the moon — his point of view as he first exited the LEM, his time spent at Little West Crater, the memories that may have crossed his mind during his lunar EVA.”

Singer told Variety on Monday that the film also chose to focus on Armstrong’s character and showcase other sides to the American icon.

“By focusing on that loss and sacrifice and failure, it humanizes this person who we think of as an idol and helps us really understand that this wasn’t easy, this wasn’t superheros that did it,” Singer added.

Gosling, who also worked with Chazelle on “La La Land,” said “it was a real honor to tell this story, but it was definitely a huge responsibility.” He previously said that the moon landing was not just an American achievement, but a “human achievement.”

Armstrong’s two sons and Hansen have also defended the film by saying they didn’t see it as “anti-American in the slightest.”

“Of course, it celebrates an America achievement. It also celebrates an achievement ‘for all mankind,’ as it says on the plaque Neil and Buzz [Aldrin] left on the moon,” they said in a statement late last month.

Aldrin, who was also on the mission and became the second person to walk on the moon, has tweeted photos of himself on the moon — each showing the flag — and a few pointed hashtags, like “#proudtobeanAmerican.”

Chazelle and Gosling have been working on “First Man” since the “La La Land” press tour. The space drama hits theaters on Oct. 12.