Box Office: ‘First Man’ to Blast Off With $20 Million-Plus Debut 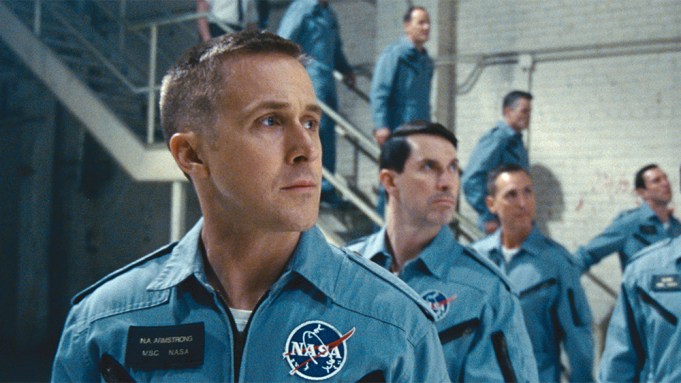 Damien Chazelle’s space epic “First Man” should achieve a solid liftoff when it opens on Oct. 12.

Universal’s biographical drama — starring Ryan Gosling as Neil Armstrong — is eyeing a launch north of $20 million though stellar reviews leading up to its opening could propel it closer to $30 million. “First Man’s” production budget was around $70 million, but when tax incentives were taken out, the cost of the film was closer to $60 million.

Josh Singer, known for his work on the Oscar-winning film “Spotlight” and the Oscar-nominated “The Post,” penned the script, which is based on James R. Hansen’s book, “First Man: The Life of Neil A. Armstrong.” It follows Armstrong’s life and the years leading up to the Apollo 11 mission to the moon in 1969. Claire Foy plays Armstrong’s first wife, while Jason Clarke portrays astronaut Ed White. The cast also includes Kyle Chandler, Corey Stoll, Ciaran Hinds, and Christopher Abbott. “La La Land” composer Justin Hurwitz wrote the score.

Chazelle’s follow-up to 2016’s “La La Land” is already getting awards buzz of its own. It received a rapturous reception after premiering at the Venice Film Festival. Among the praise was Variety’s Owen Gleiberman, who called it a “turbulently spectacular and enthralling drama.”

Fellow newcomers that weekend — Sony’s “Goosebumps 2: Haunted Halloween” and Fox’s “Bad Times at the El Royale” — should serve as counter-programming against “First Man.” “Goosebumps 2,” a family-friendly horror film based on R.L. Stine’s popular book series, is targeting a debut around $15 million. Meanwhile “Bad Times at the El Royale,” Drew Goddard’s thriller with Jeff Bridges, Cynthia Erivo, Dakota Johnson, and Jon Hamm, is looking to earn between $10 million and $18 million.