Continue to Variety SKIP AD
You will be redirected back to your article in seconds
Jun 7, 2018 3:40pm PT 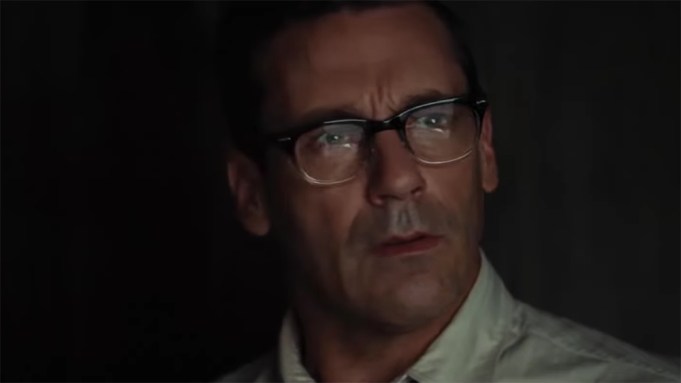 The first trailer for “Bad Times at the El Royale” has arrived, uniting a star-studded cast with plenty of murder, secrets, and spying.

The clip for the crime thriller sets the scene at the El Royale, a rundown hotel on the border of California and Nevada, where guests can choose a room in either state. Immediately, there’s a sense of danger, when the bellhop (played by Lewis Pullman) warns a priest (Jeff Bridges) looking to stay the night that “this is not a place for a priest, Father. You shouldn’t be here.”

Soon, the happy-go-lucky tone surrounding the El Royale dissolves into mayhem, with a murder, a robbery, a hostage situation and the hotel manager (Jon Hamm) spying on guests through one-way glass. At the end of the trailer, Bridge’s character, held at gunpoint, confesses “I’m not really a priest.”

The film, which also stars Chris Hemsworth, Cynthia Erivo, Dakota Johnson, Cailee Spaeny and Nick Offerman, follows seven strangers, each with a secret to bury, who converge on the El Royale. Over the course of one night, the characters seek redemption, which by the looks of it, may not go as planned.

“Bad Times at the El Royale” is written and directed by Drew Goddard, who received an Oscar nomination for his screenplay for 2015’s “The Martian,” starring Matt Damon. He also directed Hemsworth in 2012’s “The Cabin in the Woods” from a script he co-wrote with Joss Whedon, and has a screenplay writing credit on “World War Z.”

The film hits theaters Oct. 5. Watch the trailer above.