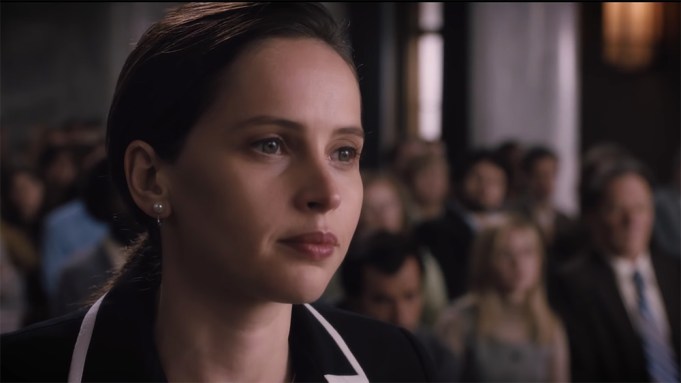 Felicity Jones transforms into a young version of Supreme Court Justice Ruth Bader Ginsburg in the first trailer for “On the Basis of Sex.”

The British actress speaks in Ginsburg’s distinctive Brooklyn-inflected accent in “On the Basis of Sex,” which deals with on of Ginsburg’s earliest cases, Weinberger v. Wiesenfeld. She successfully argued before the Supreme Court in 1975 that a widower denied his wife’s survivor benefits under Social Security violated the right to equal protection secured by the Due Process Clause of the Fifth Amendment to the United States Constitution.

“If the law differentiates on the basis of sex, when will men and women ever be equal?” she asks in the trailer.

The story’s narrative shows a young Ginsburg as she teams with her husband Marty (played by Armie Hammer) as she confronts tradition in a quietly bold way, saying evenly at one point to another attorney, “You don’t get to tell me when to quit.”

Jones, who starred in “Theory of Everything” and “Rogue One: A Star Wars Story,” said in April at Cinemacon that she spoke in the jurist’s voice while on the set. “I was full Ruth Bader Ginsburg,” Jones recalled.

“On the Basis of Sex” comes months after “RBG,” Betsy West and Julie Cohen’s critically acclaimed documentary on the life and career of Ginsburg. The Magnolia Pictures and Participant Media title has generated a mighty $12.5 million at the domestic box office.