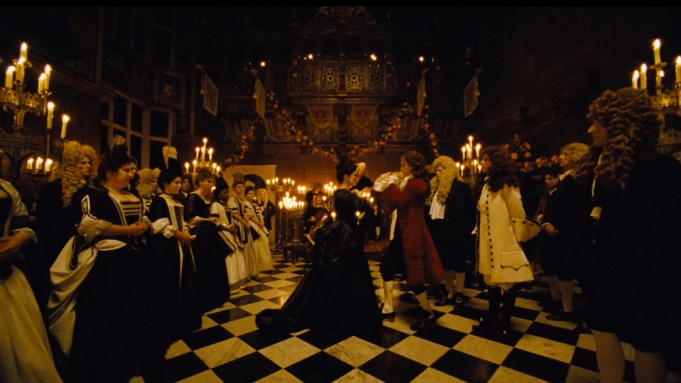 We’ll go out on a limb and say no scene in this year’s crop of awards films was more WTF? than the absurd and delightful royal dance moment in “The Favourite.”

Debuting early on in Yorgos Lanthimos’ female love-triangle drama, the dance serves as wonderful reminder that, even when dressed like Merchant Ivory and full of Shakespearean power grabs, this is still Lanthimos’ world — thanks to disorienting modern choreography and outright silliness.

Stars Rachel Weisz and Joe Alwyn square off in the scene, set at a palace rager thrown by Olivia Colman’s Queen Anne. The scene has two purposes: establish how autonomously Weisz’s Lady Sarah operates as the Queen’s closest adviser and secret lover, and how temperamental the wheelchair-bound queen can be when she’s reminded of all the fun she can’t have.

“I must dance,” Weisz tells Colman when an unremarkable instrumental piece begins to play. She pulls Alwyn, a lackey of powdered-wig politician Nicholas Hoult, out onto the floor lined with motionless, stone-faced members of the court. And there they engage in an insane dance-off of flailing limbs, voguing, and more.

Variety spoke to Alwyn and the film’s choreographer Constanza Macras, founder of the Berlin-based company Dorky Park, who was discovered by Lanthimos on social media, for a behind-the-scenes account of the full sequence (watch the full scene above). Here’s what we learned:

Weisz and Alwyn rehearsed for two weeks in total silence. “We’d practice every day in front of everyone else, and I don’t think it was ever set to music. It was a process of humiliation. It was never set to music until right towards the end,” Alwyn said.

“The script simply said, ‘the two characters dance.’ I don’t think Rachel and I had any idea what was coming. Although it was going to stick within this traditional format of a ballroom dance, and people being very straight-faced and serious and having period music, he was wanting us to explore and go a little further with the dance moves — if you can call them dance moves. Rachel was in a huge dress and corset and I was in high heels and a wig. I love the contrast, being in that stuffy world with this irreverent, modern tone. I think it’s brilliant,” he said.

Lanthimos drew from old Hollywood and iconic pop stars. “Yorgos sent us a Madonna video, with voguing. In terms of wider references, he sent me another video of Buster Keaton and Jack Lemmon,” Alwyn said.

Macras said she approached the assignment like any other piece at her company. “It was great to warm up with them, to be loose and not think and get them connecting. He wanted to have this idea of specific movements,” said the choreographer, who also handled the movement for another celebrated scene in the film — a cat-and-mouse play fight in the woods between Alwyn and Emma Stone.

“I think he wanted to film a period dance, but [said], ‘I don’t want anything period.’ So we started to make all these weird improvisations. It was very similar to the way it works in [professional] dance,” Macras said.

They named the dance moves. Alwyn dipping in his heels and wig? Weisz clamped to Alwyn’s back spinning in a circle? The train of her dress smacking observers in the face as she’s tossed around? All those moves have names; check out the video for what’s what.

Parties were injured. “It was pretty physical, but we managed to reign it in. We got entangled a few times. Earlier on, we had an incident with my wig catching her dress and getting stuck,” Alywn said of Weisz’s costume.

The scene is not about dancing. It’s about not dancing. “I think it’s a scene about Olivia,” Alwyn concluded of the immobilized queen. “She sees Rachel able to move around this room in an exuberant, fun, free way. Olivia has an inability to participate in that side of the world.”

Macras agreed, and said there were many more steps cut out in favor of a tight closeup on Colman’s sullen, then enraged, face.

“There was one movement I was in love with, it was so silly. I call it ‘Doll House,’ it looked like some kind of machinery. It didn’t make it because the [camera] goes to Olivia’s face. What can you do?” she asked.