‘Fantastic Beasts: The Crimes of Grindelwald’ Reviews: What Critics Are Saying 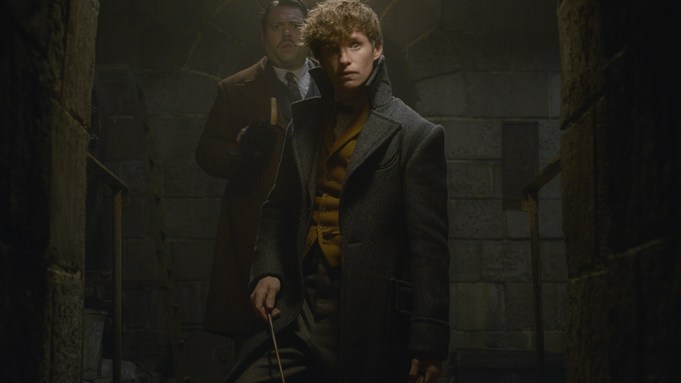 The follow-up to the first of five “Fantastic Beasts” films, critics have begun to sound off on David Yates and J.K. Rowling’s “The Crimes of Grindelwald.” So far, critics have accused the film of using overly dramatic fantasy-action sequences and elaborately CGI’d beasts to distract from an underwhelming script and a needlessly complicated, low-stakes plot — though one critic finds a silver lining, calling the film “the first anti-Trump blockbuster.”

Here’s what the critics are saying about “Fantastic Beasts: The Crimes of Grindelwald.”

“The noisiest, most rhythmless, and least coherent entry in the Wizarding World saga since Alfonso Cuarón first gave the franchise its sea legs in 2004, ‘Grindelwald’ feels less like ‘The Hobbit’ than a trawl through the appendixes of ‘The Silmarillion’ — a confusing jumble of new characters and eye-crossing marginalia. Most of the surface pleasures of filmic Potterdom (the chiaroscuro tones, the overqualified character actors, the superb costuming, James Newton Howard’s warmly enveloping score) have survived intact, but real magic is in short supply.

“An excruciating bore just barely enlivened by stray glimpses of Hogwarts, a flicker of gay romance and a menagerie of computer-generated creepy-crawlies, ‘Fantastic Beasts: The Crimes of Grindelwald’ is enough to make J.K. Rowling fans weep in frustration, provided they can even keep their eyes open.”

“The last place you’d expect to find the first anti-Trump blockbuster of the Donald’s presidency is a Harry Potter-related prequel. But here it is, folks, a not-so-innocuous family film – from J.K. Rowling, in origin-story mode – about building a wall, literal and metaphoric, to keep out scary things people don’t understand…the real stars here are the beasts, supposedly ugly, weird and dangerous, but paragons of FX creativity in service of genuine ideas.”

“It needs to have an interesting story with dynamic characters and only tangentially tease toward future films that may or may not happen. However, Rowling’s script goes the opposite way. ‘Fantastic Beasts: The Crimes of Grindelwald’ is even less concerned with telling a concise, satisfying story than its predecessor. What’s worse is at almost every turn, it weaves in broad strokes created only to set up the next movie, few of which add to what’s actually happening on screen.”

“[‘The Crimes of Grindelwald’ is] a darker and bolder film that intertwines different eras of the ‘Potter’ mythology and delivers a more relevant cinematic villain than that malevolent snake face, Voldemort. Old-school Potterheads will rejoice, though fans of the charmingly quirky group of heroes from the first “Beasts” may lament their do-gooders getting lost in a growing magical landscape.”

“This ‘Fantastic Beasts’ film is as watchable and entertaining as expected and it’s an attractive Christmas event, but some of the wonder, novelty and sheer narrative rush of the first film has been mislaid in favour of a more diffuse plot focus, spread out among a bigger ensemble cast.”