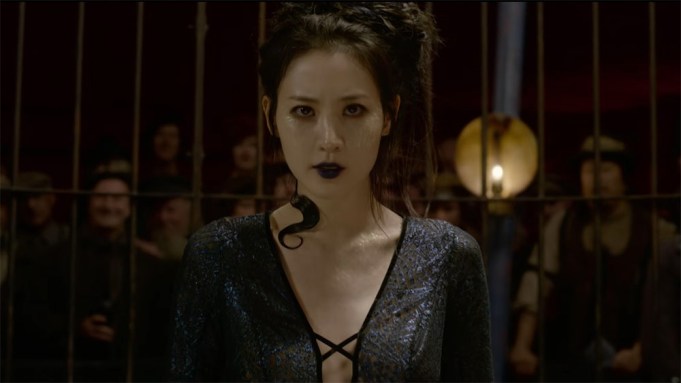 Warner Bros. dropped the final trailer for “Fantastic Beasts: The Crimes of Grindelwald” on Tuesday.

The studio teamed up with Twitter to exclusively launch the spot on the social media platform before it went live elsewhere. When the trailer debuted, electronic billboards posted in New York City, Toronto, and Tokyo flooded with real-time Twitter reactions from fans using the hashtag #WandsReady.

Eddie Redmayne returns in the highly anticipated sequel as the wizard Newt Scamander, who is called upon by Professor Dumbledore (Jude Law) to track down the evil wizard Gellert Grindelwald (Johnny Depp).

“The wizarding and non-wizarding worlds have been at peace for over a century,” Dumbledore tells Scamander in the new footage. “Grindelwald wants to see that peace destroyed.”

“You want me to hunt him down? To kill him?” Scamander asks. Dumbledore tells Scamander, “I cannot move against Grindelwald. It has to be you.”

Also in the clip, Ezra Miller’s Credence Barebone is seen hissing the name “Nagini” as new cast member Claudia Kim bends backwards to transform into a snake. Potterheads know that’s a reference to the snake that belonged to Lord Voldemort.

The previous trailer that premiered at San Diego Comic-Con in July gave a glimpse at returning characters from 2016’s “Fantastic Beasts and Where to Find Them,” like Scamander, Katherine Waterston’s Tina Goldstein, and Dan Fogler’s Jacob Kowalski. It also introduced newcomers including Brontis Jodorowsky as alchemist Nicolas Flamel and Callum Turner as Newt’s older brother Theseus Scamander.

Director David Yates and J.K. Rowling, who wrote both the “Fantastic Beasts and Where to Find Them” book and screenplay, are both back on board for the sequel. Rowling said in 2016 that there will be five installments in the “Fantastic Beasts” film franchise. The “Harry Potter” author previously defended Depp’s casting after fans denounced the actor, who was accused of physically abusing his ex-wife Amber Heard. She later dismissed the case with prejudice.

“Fantastic Beasts: The Crimes of Grindelwald” arrives to theaters on Nov. 18. Watch the trailer above.