Emily Blunt: ‘If Women Are Given a Voice, They Use It’ 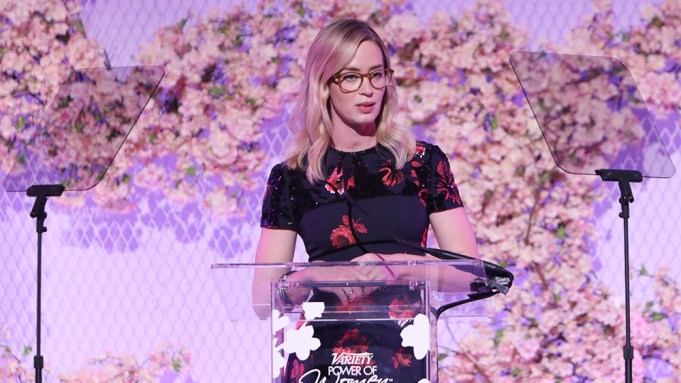 Emily Blunt discussed how women are transforming the world during Variety’s Power of Women event in New York.

Blunt said the topic of girls’ education “moves and matters” to her greatly. After recounting daily conversations with her 4-year-old daughter, Hazel, about what she learned in school (“The other night … she said, ‘Do you know how to get to Harlem? You take the A train, it’s the quickest way'”), the actress said she learns from her children.

“They yearn to learn, they crave it,” she said of her daughters. “They are lucky enough — and as was I and as were most girls that I knew growing up — that your dreams were never going to fall on deaf ears, and that your thoughts and voice mattered and could make a difference.”

Blunt then praised the work of the Malala Fund, the nonprofit funded by Malala Yousafzai and her father, Ziauddin, in 2013. Malala Yousafzai has “the most compassionate of hearts, but courage and will of steel.”

“When the bullets rained down on these girls, the world stopped in their tracks and they listened to Malala, but most importantly, so did millions of girls around the world put in the same position. This courageous, eloquent, and inspiring girl became their light,” Blunt said, referencing the young activist shot by the Taliban for pursuing an education.

“There are over 130 million girls missing out on an education because they have to work or they are married by the age 12 or they lack access to school facilities or have to care for younger siblings,” she said.

When given a chance, Blunt said women can move mountains.

“If women are given a voice, they use it. When they are handed the purse stings, the communities thrive. When they are given a job, they flourish. They organize better. They galvanize more passionately and they are more likely to encourage peace where peace should be the priority,” she said.

Blunt most recently starred in her husband John Krasinski’s directorial debut, “A Quiet Place,” which received rave reviews from audiences and critics alike. Later this year, Blunt will appear in “Mary Poppins Returns” alongside Lin-Manuel Miranda. Her “Mary Poppins” co-star Emily Mortimer introduced her at the event.

When she isn’t onscreen, Blunt, along with Krasinski, works to draw attention to and raise money for the Malala Fund. The fund hopes to give girls around the world the ability to have 12 years of education — schooling that is free, safe, and of quality.

Blunt and Krasinski — parents to two daughters, ages 4 and 2 — had been looking to get involved with a charity that promoted education and women’s issues.

“From the first time we met, I knew Emily would be a great friend to me and to all girls fighting for their education,” Yousafzai told Variety for this week’s Power of Women issue. “I am so grateful for her ability to see the faces of millions of girls in her own daughters.”

Blunt and Krasinski have so far raised money for the fund by auctioning off a double date to the New York premiere of their film “A Quiet Place.” In the fall, the couple hopes to visit Colombia or India to see Malala Fund’s work firsthand. Those are new regions for the organization. Until now, it has focused on supporting educators and educational champions in places where it is difficult for girls to attend school, such as Afghanistan, Nigeria, Pakistan, and countries hosting Syrian refugees.

Yousafzai also sends reports to Blunt from the field.

“When Malala goes back to the communities it’s so exciting because women are at the front of the crowd,” says the actress. “They’re telling you how they’re organizing. They’re telling you what’s happening. As we’re finding out in this climate that we’re living in, when women are given their voice they will use it.”