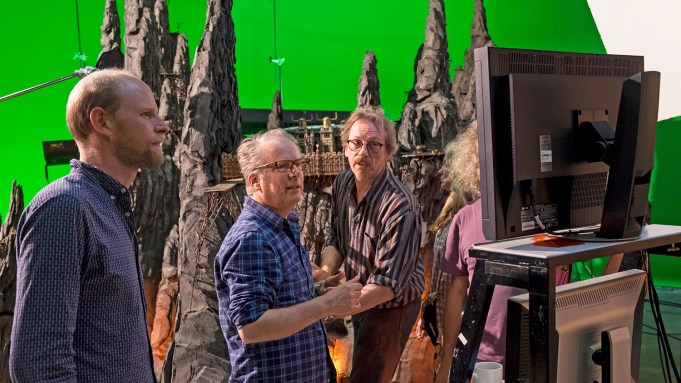 Four-time Oscar winner Nick Park is back on the big screen with Aardman Animations’ “Early Man,” his first directing effort in a while, which opens wide in the U.S. on Friday.

The tale of a peaceful band of valley-dwelling Stone Agers who must fight to win back their verdant home from the more advanced Bronze Age humans in a high-stakes soccer match is Park’s first feature-length solo directing effort and one of his few projects that don’t star his beloved Wallace & Gromit characters. It features the voices of Eddie Redmayne as the good-natured cave man Dug; Maisie Williams as Goona, a Bronze Age girl with her own soccer aspirations; and Tom Hiddleston as Lord Nooth, the pompous Bronze Age governor who is bent on turning the tribe’s beloved valley into his latest mine.

Park first came up for the idea of a cave man character almost a decade ago. “I think I found a sketch that I’d done that had 2010 on it,” he recalls. “I wasn’t full time on it then, but I was kind of just developing it slowly. But, yeah, it goes back that far. We started more solidly working on it a couple of years later.”

Park worked on the story with Mark Burton, who later teamed with James Higginson on the screenplay. “We’d do a draft and then pitch it to colleagues and get feedback a few times, then, slowly, we’d get to storyboarding.” They finally went into production about two years ago.

Because of the long development process, Park was keen to direct “Early Man” on his own after sharing feature directing duties with Peter Lord on Aardman’s first feature-length film, 2000’s “Chicken Run,” and with Steve Box on Aardman’s 2005 animated feature Oscar winner “The Curse of the Were-Rabbit.”

“On this one, I just felt it was very much my thing,” he says. But it wasn’t without challenges. “It means, of course, that you have to have a different structure of how to feed information down. Directing 14 animators at the same time is too much for one person, so I had my two seconds-in-command.” Park praises his animation directors Will Becher and Merlin Crossingham. “They are very good; natural-born animators. We shared a lot of the same sensibilities.”

Also in that timeframe, there’ve been some technical changes to filming stop-motion animation. “‘Curse of the Were-Rabbit’ was all shot using film cameras, and this was all shot with digital cameras,” Park explains. The shift made filming a lot easier and shots can be done more quickly, he says. “When a character leaps off the ground, we used to have to suspend them in the air with wires and a fishing line. But then you’d have to hide the reflection and hope it doesn’t catch any light. It would take the animator a while to position things. Now we don’t have to worry about that. We just have a big rig holding the character up and we can paint it out afterward because it’s digital.”

Even with the technical advancements, “Early Man” has that unique Aardman look that sets it apart from any other stop-motion projects. And its chock full of the kind of jokes and puns that Park and Aardman are known for and which beg repeated viewings.

“I remember when I was doing the first ‘Wallace & Gromit.’ I made most of it as a student. I remember how fun it was making the models and I remember there was a sled in the background and I wrote Rosebud on it because I’d just seen ‘Citizen Kane.’ I just started having fun that way and thought, ‘It’s nice that people like the details,’ so it’s just become a trademark, really,” says Park.

Filling “Early Man” was no easy task, but just about everyone in the production got a chance to share ideas. “It’s not just me and Mark, other writes would come in with stuff while we’re writing and pile ideas in,” Park explains. “It might be signs in the background or stuff with double meanings. Puns. Sometimes the actors come up with stuff as well as they improv and ad lib. A lot goes in and a lot goes out, but everything is all quite chosen. It may not look like it,” he says with a chuckle.

Since the film is steeped in the story of how cave men could have invented soccer after the asteroid that wiped out the dinosaurs hit the Earth and since the British are known for their rabid support of their football teams, Park is asked what soccer team he supports, and his response is a surprise.

“I’m not really a football fan. I’ve never been one,” he says. “In a way, I felt it gave me an objective view on the game. I didn’t want it to be primarily for football or soccer fans. It’s more of a comedy adventure.” Park says “Early Man” is more of a prehistoric sports movie in the vein of “The Mighty Ducks” or “Miracle on Ice,” but with higher stakes — their way of life depends on winning. “In those films, they didn’t always have to win, they just have to prove something to themselves. (In ‘Early Man’), the soccer is just a metaphor and it’s more about this tribe and how they come together.”

Now that “Early Man” is playing to great reviews in the U.K. and the U.S., Park is taking a bit of a break. But he does have some ideas about what his next project might be, and it may involve some very dear friends.

“I’ve got ideas,” he says. “I’d love to think of coming back to Wallace & Gromit, for example. They’re my babies.”