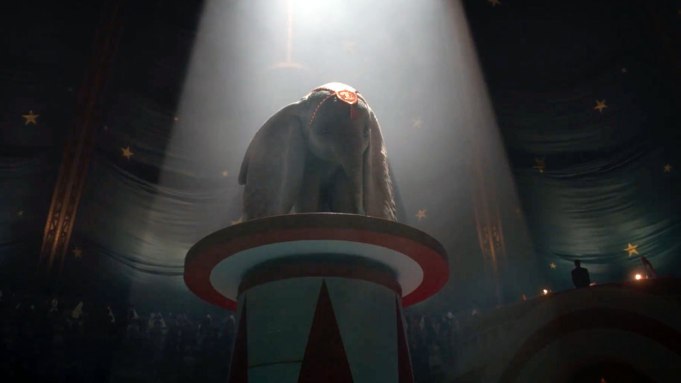 The flight takes place at the very end of the 80 seconds of footage after the teaser promises, “A beloved tale will take you to new heights.”

“Dumbo,” directed by Tim Burton and loosely inspired by the 1941 animated film, stars Danny DeVito as the owner of a struggling circus. He enlists former star Holt Farrier (Colin Farrell), and his children Milly (Nico Parker) and Joe (Finley Hobbins) to care for a newborn elephant whose oversized ears make him a laughingstock.

“We’re all family here, no matter how small,” Parker tells the sad-eyed elephant.

At the end of the trailer, Parker’s character turns out to be the key to the pachyderm’s flight, telling him, “Here, Dumbo. Show them.”

The producers are Justin Springer, Ehren Kruger, Katterli Frauenfelder, and Derek Frey. Burton directs from a screenplay by Kruger. “Dumbo” flies into theaters on March 29, 2019.