Donald Trump Jr. to Co-Host ‘Death of a Nation’ Screening in D.C. With Dinesh D’Souza 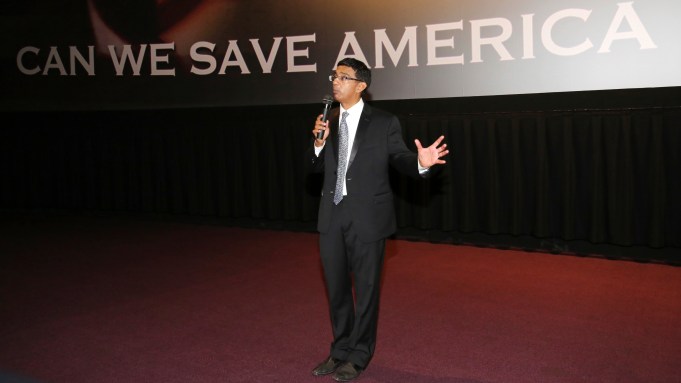 Director Dinesh D’Souza and Donald Trump Jr. will co-host the Washington, D.C. premiere of “Death of a Nation” on Wednesday, D’Souza told Variety.

While D’Souza says President Donald Trump has yet to see the controversial film, which compares the president to Abraham Lincoln and Democrats to Nazis, the D.C. screening is expected to attract members of the White House staff, cabinet, and the senate.

“We don’t know exactly who is going to show up, but certainly lots of D.C. V.I.P.s will be there,” D’Souza told Variety at the Los Angeles premiere on Tuesday. ” We’ve invited White House staff, and we know that some cabinet members are coming, some senators are coming — even though congress is not in session right now. But we’ll get a good crowd.”

Excited to cohost the DC red carpet premiere of ⁦@DineshDSouza⁩ new movie Death of a Nation tomorrow. It's going to fire up Republicans for the midterms exploring how fascism so closely links to the platform of the progressive left today. WATCH IT! https://t.co/pjVGvRpyNZ

“Death of a Nation” made waves with its trailer, which blames Democrats for slavery and the assassination of Lincoln, in addition to arguing that Adolf Hitler and fascism are aligned with liberal ideologies. But many, including Variety film critic Owen Gleiberman, have denounced the project as another of D’Souza’s attention-seeking displays of fallacies and dangerous revisionist history.

The film, D’Souza says, tells the story of why, as a first-generation immigrant, he was “attracted to America in the first place.” He also expressed his thoughts on Donald Trump’s widely criticized immigration policy separating children from their parents at the United States border.

“I think that’s very unfortunate,” D’Souza said of the separations. “I also do think the parents who bring their children across the border illegally are putting themselves and their children at risk, so I would like to see a humane solution, but I also think a country does have the right to enforce its laws.”

Also in attendance at the L.A. premiere were D’Souza’s wife and executive producer, Debbie D’Souza, and co-producer Aaron Brubaker, as well as conservative political commentator Tomi Lahren and actor-turned-Congressional-hopeful Antonio Sabato Jr., who expects the president to join him on the campaign trail as early as September.

“Death of a Nation” hits theaters on Aug. 3.