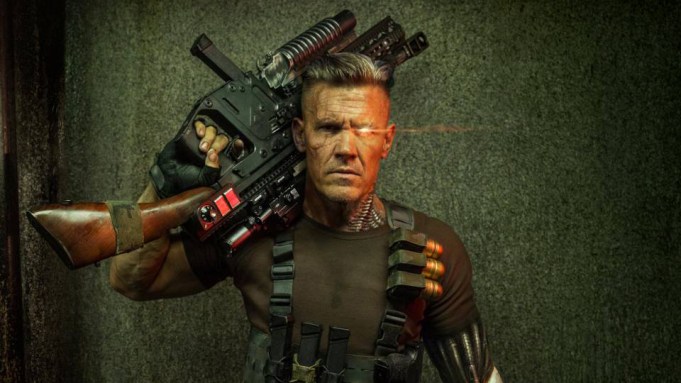 Cable gets his moment in the limelight in the action-packed “Deadpool 2” trailer released by Fox on Wednesday.

“I was born into war, bred into it,” Josh Brolin’s new baddie says in the footage. “People think they understand pain, but they have no concept of it.”

“What in the actual ass?” Miller says. “Dale! Why are the visual effects not done? It’s a metal arm! It’s not like we’re trying to remove a mustache!” (in reference to “Justice League’s” costly reshoots, which included digitally removing Henry Cavill’s facial hair in post-production).

To buy Dale some time, Deadpool proceeds to distract the audience with a toy recreation of a battle in the film between his character (dressed as Woody from “Toy Story”) and Cable.

The comic book movie is a sequel to the highly praised “Deadpool,” which became in 2016 the highest-grossing R-rated film of all time.

Reynolds has been whetting fans’ appetites for the past year with images of new characters. He dropped a hilarious Bob Ross-inspired teaser in November titled “Wet on Wet.” The new profanity-laced trailer suggests that Deadpool will continue to show off his vulgar humor and charm in the upcoming pic.

The new footage comes one day after Reynolds revealed the “Flashdance”-like poster for the film.

Take your passion. And make it happen. #Deadpool pic.twitter.com/7MY7z7x6pj

“Deadpool 2’s” release was recently moved forward by two weeks to May 18.