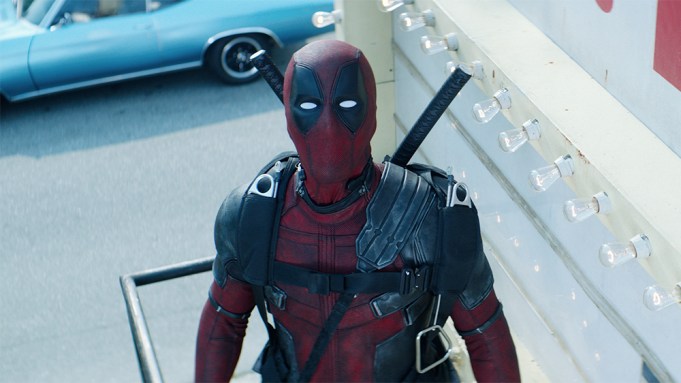 Fox’s “Deadpool 2” has topped $500 million at the worldwide box office in less than two weeks.

“Deadpool 2” has taken in $218.5 million domestically and another $287 million in international markets, led by $28 million in the U.K. and $27 million in South Korea.

The original “Deadpool” stunned the industry two years ago with a $132.4 million debut weekend, which holds the record for an R-rated title, and went on to finish with $330 million domestically and $420 million internationally. Fox decided in January to open the Ryan Reynolds sequel two weeks earlier to get it into theaters a week ahead of “Solo: A Star Wars Story.”

“SingularDTV’s approach to distribution is as bold as the film itself — I feel I’m getting a front-row view of the future,” Soderbergh said.

“Perfect” centers on a young man with a violent past who enters a mysterious clinic, where the patients transform themselves using genetic engineering. Other executive producers include Marco Vicini, Phil Hoelting, Matthias Koenigswieser, Rooter Wareing, Nikki Pederson, and Adam Silvestri. XYZ Films and CAA Media Finance negotiated the deal on behalf of the filmmakers.

SingularDTV will release the film theatrically in the U.S. later this year, with worldwide event-driven screenings to follow. It will become available on SingularDTV’s global digital platform in early 2019.

SingularDTV’s president of entertainment Kim Jackson said, “This is exactly the kind of bold filmmaking that SingularDTV stands for. By bringing blockchain technology into the film industry, we are forging ahead with creating an environment where forward-thinking artists and filmmakers can thrive.”

Based in the studio’s Hollywood location, Mass will oversee a growing slate of animated feature films, as well as a range of episodic, streaming, and cross-platform projects.

Reel FX partners with major studios on its original properties, including the recently announced “Monster of the Hill” with Paramount Pictures and Walden Media. The film, which is set to open in 2020, is set in a world where monsters are tame and monster wrestling is a popular sport. Based on the graphic novel by Rob Harrell, the movie is produced by longtime Reel FX executive Brad Booker, directed by Disney veteran Bradley Raymond, and written by Matt Lieberman and Etan Cohen.

Notable Reel FX films include “The Book of Life” with Fox, “Free Birds” with Relativity Media, which each generated more than $100 million at the worldwide box office, as well as “Rise of the Guardians,” which was developed in-house before the property was sold to DreamWorks Animation. Reel FX will continue to serve as a vendor for upcoming film projects such as Warner Animation Group’s “Scooby-Doo.”

With an employee base of over 200, Reel FX recently opened a feature animation complex in Montreal. With its Dallas and Hollywood locations, the studio will double its staff over the next two years.

Mass was previously VP at Paramount Animation, where he helped acquire “Monster on the Hill” and “Clifford the Big Red Dog” for the studio, and oversaw the recently released “Sherlock Gnomes.” During his initial stint at Reel FX Animation Studios, he served as an executive during the development and production of “Book of Life” and “Free Birds.”